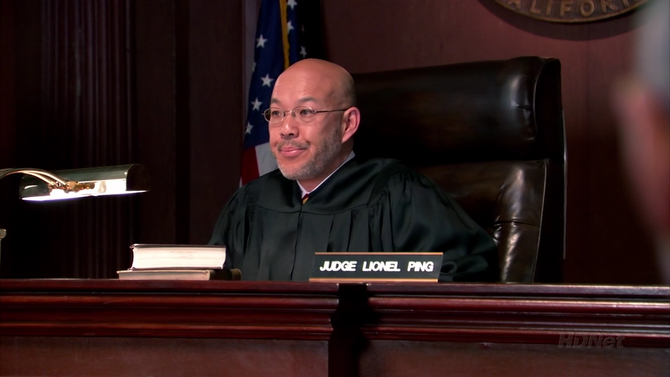 Judge Lionel Ping is a judge serving at a courthouse in Newport Beach, California. He proceeds over multiple Bluth family trials.

Judge Ping presides over the legal arraignment of George Bluth at the courthouse. Barry Zuckerkorn has had trials with him before and is obviously not a fan. ("Beef Consommé") At a potential settlement hearing Barry was once again upset that they were given Ping as judge. ("Altar Egos") Judge Ping saw over the next day in court as well and got upset when Michael threw a Bible at Maggie Lizer. ("Justice Is Blind")

Judge Ping oversees the case of Skip Church's Bistro v. Loretta, with Loretta, represented by Maggie Lizer, suing Skip Church's Bistro, represented by Barry Zuckerkorn, for making her fat by tempting her with Skip's Scrambles. Judge Ping, like the jury, takes pity on Maggie who is pretending to be pregnant. ("Out on a Limb") He later threatens to throw Zuckerkorn out for spanking Lizer. It is unknown what happen to the trial, as Loretta turned out to be pregnant instead of fat. ("Hand to God")

Retrieved from "https://arresteddevelopment.fandom.com/wiki/Judge_Lionel_Ping?oldid=47508"
Community content is available under CC-BY-SA unless otherwise noted.