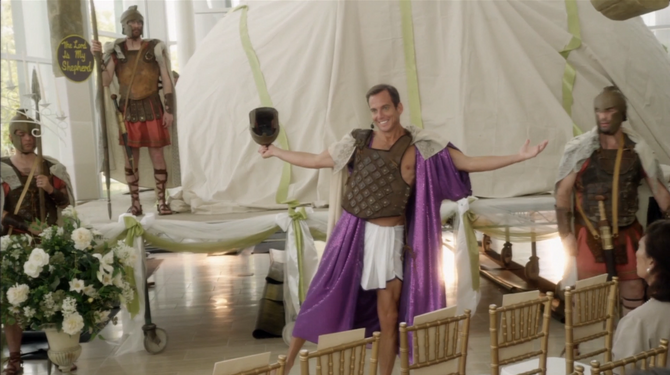 "Just Deserters" was the fourth episode of chronological re-cut of Arrested Development's fourth season. It premiered on Netflix on May 4, 2018.

George and Lucille hope a "trial separation" pays off but it means Lucille has to spend her house arrest alone with Buster. G.O.B.'s big day arrives.

In the desert, George Sr. is running a sweat lodge for CEOs where he places them in a sweat lodge with Oscar and then sells the dehydrated CEOs expensive lemonade in order to "motivate" them. All the customers there are unaware that George and Oscar are identical twins and believe them to be one man, Father B.

This business was part of a scheme with Lucille, who is under house arrest, to make money before they send the land to the goverment so they could build a border wall between the U.S. and Mexico. They also decided to get a fake divorce so people don't suspect their plans. At the family meeting at the penthouse, Lucille announced that Buster will be the star witness in her trial. G.O.B. also announced his marriage to Ann, and Michael left to sell his shares to Lucille 2.

After he returned to the desert, George Sr. found out that the government put the border wall on hold because of the housing market crash. He joined Oscar in a sweat lodge and fainted due to the heat. However, it gave him an idea to start the sweat lodge business seen at the start of the episode.

George Sr. misses G.O.B.'s wedding along with the rest of the family. G.O.B. notices Tony Wonder and eventually Tobias, although Tobias is not there as a guest and is only there to play a role in the wedding illusion. During the illusion, G.O.B. frees himself from a giant, glittery cross then is supposed to escape from a model cave he brought into the church although the actual plan is undo his handcuffs then hide in a fake boulder to avoid the wedding. However, the handcuff keys are missing from the cave and G.O.B. is knocked out and stuck in the boulder because he cannot cushion his fall with his arms. Pastor Veal and his congregation wait for two weeks before they open the cave, as G.O.B. requested. When they open the cave, they find it empty as G.O.B. (in his boudler) have been taken to a storage unit.

Buster and Lucille continue living together although, after three months, tensions start to rise. They argue and Buster threatens to not testify in Lucille's trial. He leaves the apartment and bumps into Lucille 2 who offers his a drink of juice, which he accepts.

On the next Arrested Development: Fateful Consequences... Lucille notices all her possessions have the names of family members on them and thinks it's because they believe she'll go to prison. Also, G.O.B. is found in a storage locker by the TV show Locker Hawkers: Something Smells Terrible Edition.

Retrieved from "https://arresteddevelopment.fandom.com/wiki/Just_Deserters?oldid=54744"
Community content is available under CC-BY-SA unless otherwise noted.