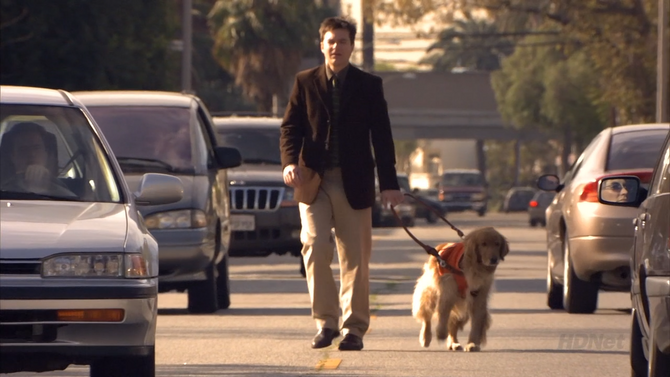 "Justice Is Blind" is the seventeenth episode of Arrested Development's first season.

G.O.B. steals a file on the government's case against the Bluth Company that Maggie had given to Michael. Tobias is sent to Maggie's house to get evidence, George Michael tries to prove Maeby's fraud, and Lindsay fights to remove the Ten Commandments from the courthouse lawn.

Follow the events earlier that day, at the model home Michael contemplates reading the Bluth family evidence file blind attorney Maggie asked "Chareth Cutestory" to review (not knowing that Chareth was actually Michael Bluth.) G.O.B. enters and urges Michael to read it. In the kitchen Michael stresses to Maeby to not abuse the legal system when Lindsay suggests suing their high school for not having a handicapped ramp in the fieldhouse. Michael then decides to come clean to Maggie, who admits that she knew it was him since the hearing the day before and gave him a dummy evidence file. They try to say goodbye but end up having several drinks and going home together.

The next morning, Michael misses a meeting at prison with his family because he and Maggie are still sleeping together. G.O.B. reveals to his parents and Barry that he stole the evidence list from Michael and George suggests G.O.B. steal the real evidence from Maggie's house. G.O.B. later coyly convinces Tobias to use his cat-like agility to break into Maggie's house.

Upset at the thought that he would be displaced if his father was released from prison, Buster turns himself into the police to testify against his father. Maggie interrogates him and finds out he knows nothing. Michael takes Justice for a walk and pretends to be blind to see what it is like. When Justice leads him into traffic he takes the dog to a vet who reveals that Justice is blind and therefore Maggie can see. Maggie returns home as Tobias is breaking in but must keep up her blind act. Unable to complete his mission, Tobias is cornered by Maggie. To escape he sprays perfume in her eyes and flees.

At the courthouse Michael attempts to get the case thrown out by proving that Maggie has been faking her blindness. He throws a Bible at her face but she has been temporarily blinded by the perfume. The court enters recess and Michael apologizes to Maggie. They say goodbye to each other but sleep together for one last time in the courthouse.

George Michael confronts Maeby about her alter ego Surely Fünke, who is preparing to "roll" for Student Council Treasurer. She tells him that she plans to kill the character off before prom. He later hurts him arm helping Surely to the top of the bleachers and Maeby stages a protest outside the courthouse to get ramps installed. George Michael urges her to stop but when she calls him a hero in front of a crowd he gets swept away and joins her protest.

After leaving the courthouse during the previous day's hearing, Lindsay breaks a heel on a statue of The Ten Commandments. She is then given a flyer urging people to rally for the separation of church and state. She protests the statue and it is removed from the courthouse, but is accidentally dropped on Barry's car. 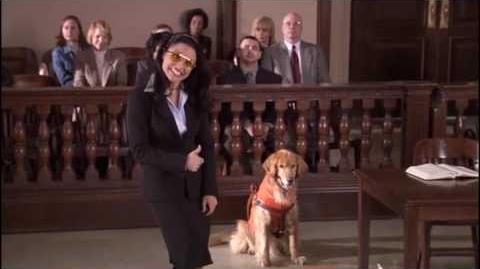 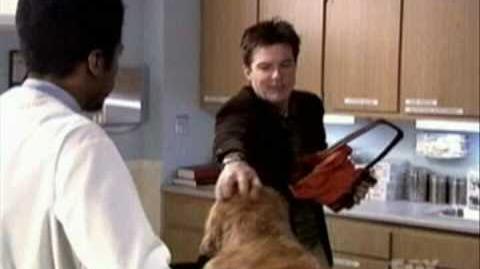 Arresed Development - Justice is Blind - Dog in the Garbage Can
Community content is available under CC-BY-SA unless otherwise noted.
Advertisement