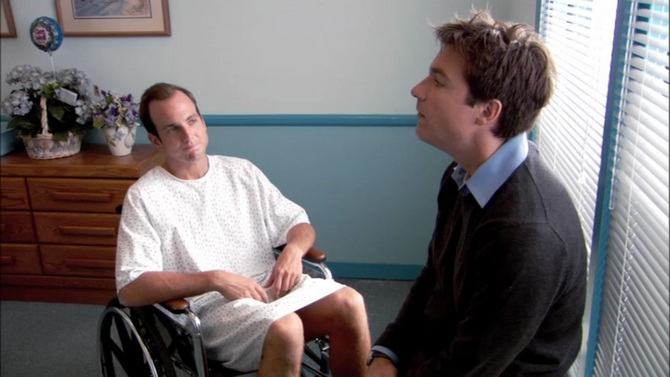 G.O.B. decides to lock himself in his father's prison for 24 hours to get back in with the alliance, and to spend quality time with his father. Michael takes G.O.B.'s girlfriend to an awards show, and Buster inadvertently flirts with his mother's rival.

G.O.B. informs Michael that he has arranged to have himself incarcerated at the same prison that holds their father. He plans to break out three days later as a publicity stunt for his magic career. Michael is surprised by G.O.B.'s girlfriend Marta the next day when she tells him he is her date to her Spanish-language television award program Los Premios Desi. He is so taken aback by her beauty and strong moral code that he falls in love with her at the awards show.

In prison, G.O.B. angers a fellow inmate White Power Bill and embarrasses his father. When G.O.B. decides it is time to pass the key he has ingested he can't go to the bathroom without privacy. He calls Michael to get him to use the stair car to escape prison, but Michael shows up on his bike. Michael decides that he doesn't need G.O.B.'s blessing to pursue Marta but when he tries to open up his heart she receives a call that G.O.B. has been stabbed. He had been playing his first game of catch with George, Sr. to make up for a childhood of being ignored by his father when Bill stabbed G.O.B. in the back.

They all rush to the hospital where G.O.B. recommits himself to Marta and Michael is too good of a guy to get in the way. When he is alone, G.O.B. realizes he has "made a huge mistake".

Lindsay in a tree

Lindsay, upset that the new family car is the stair car, is asked by Michael to get an activist named Johnny Bark out of a tree so the Bluth Company can resume construction. When she gets stuck in the tree she reminisces about her activist days. Michael brings back the stairs but she decides to stand up for nature and protect the trees. Maeby, meanwhile, stands for the opposite of what her mother stands for, claiming she is a hypocrite. George Michael agrees with whatever Maeby stands for, hoping to get her attention.

Lindsay sneaks out the tree at night and Johnny follows her, professing his love for her. The tree is ripped down as she shoots him down, apologizing for leading him on.

Lucille at the Desis

Lucille and Buster attend Los Premios Desi to keep up her social clout. There, she makes fun of her rival Lucille Austero's dead husband while the widow makes fun of George's incarceration. They laugh as if they are joking. Buster, not wearing his glasses, accidentally flirts with Lucille Austero and she has a waiter give him a proposition note.

Buster later celebrates his newfound love, not knowing who it is or what she really looks like. He runs into Lucille again at the hospital and freaks out that it is his mother's friend. He suffers a panic attack and she suffers a vertigo attack.

Retrieved from "https://arresteddevelopment.fandom.com/wiki/Key_Decisions?oldid=54797"
Community content is available under CC-BY-SA unless otherwise noted.