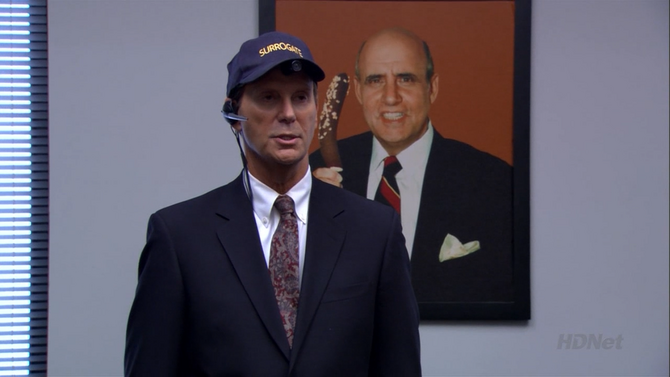 Larry Middleman is a professional surrogate hired by George Bluth to act as his eyes and ears so that he can continue influencing the family's dealings while under house arrest.

"The Surrogate", as Larry is called, is always on the job, wearing a suit and tie at all times, with a baseball cap displaying the word "Surrogate". The cap carries a small camera and microphone, which transmit audio and video feeds in real-time to George Sr's computer and/or television. George has a voice feed back to the surrogate, so that he can tell Larry what to do, what to say on his behalf, where to go, etc.

Larry is a consummate professional, never allowing his own persona to come through except on rare occasion, such as when he sometimes inserts self-promoting comments ("He's worth every penny") among George's actual words. Larry takes things too literally at times, and forget to use common sense.

George hires Larry so he can interfere with his family's plans to handle his upcoming trial. Even though Larry is present in meetings and conversation, George often gets bored and watches other shows on TV. ("Forget-Me-Now") Larry represents George at Balboa Towers, even though George is just in the other room. ("Notapusy")

George orders a jetpack online and has Larry retrieve the package from the model home. Larry instead picks up a model train set purchased by Michael for George Michael. George leaves the room to get an ice cream sandwich and Buster takes the controls so he (as Larry) and G.O.B. can build tiny town to fool the Japanese investors. He didn't give up the game because he's a pro. He later punches G.O.B. when he calls him an "idiot parrot man". ("Mr. F")

Larry attends the impromptu wedding the Bluth family arranged for Michael and Rita, but gives up the game to Michael that they know she's an MRF. George then asks Larry to go to a mirror and fires him, leading to an awkward conversation with himself in the mirror. ("The Ocean Walker")

Larry later represents Bill Kinkaid from Phosco Industries at the Save Our Bluths party thrown by the Bluth family. ("S.O.B.s")

Michael: That's why I had this meeting here, so Dad could not interfere.

Larry (on behalf of George): Interfere? I ought to pull down your pants and spank your ass raw.

Michael: I'm sorry, have we met?

Bob Loblaw: I’d be very careful of these British people. They’re going to try to get their hands on any evidence they can to hurt the family.

Bob Loblaw: No, that’s illegal. The prosecution is entitled to that evidence. Without it, they don’t have a case.

Bob Loblaw: That’s a felony. And I certainly couldn’t endorse anything like that.

George: Got ya. Wink.

Larry: Wink. Did you say “wink” or did you wink?

Michael: He said that, too, Dad.

Larry: Well, look who’s finally gracing us with his presence.

Larry: We’re meeting with the lawyers...

George: So I’ve hired this guy to be my eyes and ears.

Michael: You know, Dad, this guy costs us a fortune.

Larry: He’s worth every penny.

George: Hey, I didn’t say that.

Narrator: And Larry the surrogate showed up to pick up the jet that George Sr. had sent to the model home.

Larry: What is that, a train set? Look down, Larry.

George: No, not down at your feet.

Larry: Left. My left, your right.

George: What is the matter with this guy? And, let me guess, he’s probably...

Larry: Saying all that, too.

Lucille: Where did you get this firecracker? I... love her, Michael.

Larry: So do I. I want to kiss my new daughter-in-law.

George: Hey, not on our time, Larry.

Larry: Right on the lips.

Michael: No, no, Dad, please take it easy.


From "The Ocean Walker"

Larry: Larry go to a mirror!

From "The Ocean Walker"