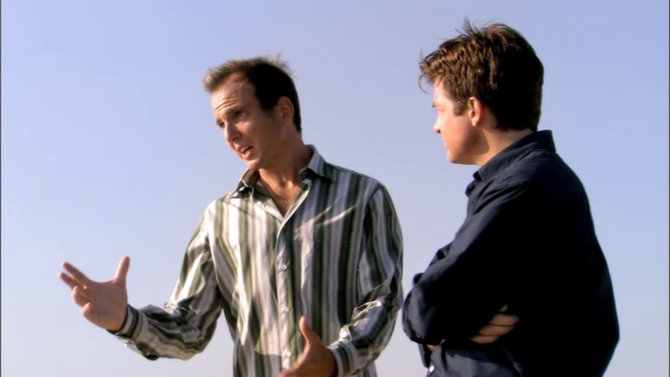 G.O.B.: But still, where did the lighter fluid come from?
From "Burning Love"

One of G.O.B.'s illusions that he always has at his disposal is the ability to make a fireball via a device he wears on his wrist. However, the illusion fails nearly every time and occasionally squirts people with lighter fluid.

He is first incapable of making a fireball while he and Michael speak about Michael's general disappointment in G.O.B.. It doesn't help G.O.B.'s situation. ("Top Banana")

While inquiring about dong tea at Ancient Chinese Secret G.O.B. notices The Sword of Destiny and explains to the cashier that he is a magician, while squiring him with lighter fluid. ("Sword of Destiny")

Lindsay punches G.O.B. a couple of times when he insults her and calls her "a surfboard". When she hits him, lighter fluid shoots into his face. ("Spring Breakout")

Although being directly asked by Michael not to perform a magic act at his wedding, G.O.B. plans one with Rita, accidentally shooting her with lighter fluid. She is amazed by the trick, probably because she is an MRF. Flashbacks also reveal that G.O.B. set Tracy Bluth on fire at her wedding, presumably with his lighter fluid trick. ("The Ocean Walker")

While competing against the Banana Stand, G.O.B. shoots off a fireball to promote the Banana Shack. ("Making a Stand")

Add a photo to this gallery
Retrieved from "https://arresteddevelopment.fandom.com/wiki/Lighter_fluid?oldid=34905"
Community content is available under CC-BY-SA unless otherwise noted.