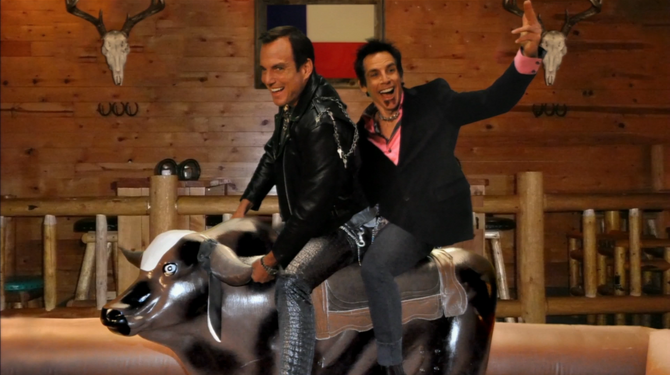 "Locked and Loaded" was the fifteenth episode of chronological re-cut of Arrested Development's fourth season. It premiered on Netflix on May 4, 2018.

Michael and G.O.B. connect over their strained relationships with their sons. Tobias looks for a place to live while working on his musical.

G.O.B. and Michael accidentally meet up at the model home. Michael sees G.O.B. is unhappy and boasts about having "an incredible year" now he is a movie producer. G.O.B. retaliates and tells Michael is he dating someone famous. They reconcile and Michael wants G.O.B. to sell the houses although G.O.B. wants to move into one as well. Michael admits that he has a rival for his girlfriend Rebel Alley because he still believes that Ron Howard is her lover, not her father. G.O.B. advises him to take her to the Ealing Club in order to impress her.

Michael feels he cannot call up George Michael about getting a signature for the movie. G.O.B. offers to phone George Michael for him and also admits that his plan is to destroy Tony Wonder, who he believes ruined the wedding illusion he performed. To do this, G.O.B. needs someone to pretend to be his boyfriend to get into the Gothic Castle to see Tony Wonder's magic show. Michael refuses to do this and it is revealed that Steve Holt also refused earlier that day. After Steve Holt hangs up, Maeby pays him for his pest control work at the model home although she doesn't recognise him. To make it work, it is Steve Holt's birthday.

Michael asks G.O.B. for his signature for the movie and he agrees to sign his lift rights away. G.O.B. then rings up George Michael and says he must speak with him about Michael at the Gothic Castle that night. Meanwhile, Tobias continues to rehearse his Fantastic Four musical at Austerity. However, DeBrie is struggling to cope with the stress. At the Gothic Castle, George Michael meets G.O.B. but he doesn't realise that G.O.B. wants him to be his pretend boyfriend. George Michael tries to find out whether his father is still upset with him. G.O.B. kisses him and George Michael leaves while G.O.B. goes to the show.

Tony Wonder performs his illusions and bursts out of a bean bag next to G.O.B. and invites him for a drink. G.O.B. tells Tony how impressed he was with his show although, at first, he actually talks to a man wearing a Tony Wonder mask. They connect and decide to go out together that night. The next day, Tobias and G.O.B. meet at the model home. Tobias explains about his relationship with DeBrie and his job at Austerity while G.O.B. tells Tobias that he is in a relationship, although he doesn't mention that it is with Tony. Tobias mentions that he cannot find anywhere to live after being wrongly convicted of being a sex offender. G.O.B. offers to sell him a model home and realises he can fill all the model homes if he sells them to sex offenders.

Later that day, G.O.B. rings to tell Tony Wonder what a nice time he had with him last night. He has to leave a phone call but immediately, Lucille phones him. She wants G.O.B. to start building the wall after seeing George Sr. can't do it. She also isn't pleased that G.O.B. was working with Michael to sell the model homes. G.O.B. drives around in his limo, trying to convince people to help him build the border wall. This fails and he decides to build it himself. As he digs in the desert, he meets China Garden who suggests that he gets the Chinese to build the wall for him. While they talk, Tony rings him back and suggests that they meet up at the weekend.

On the next Arrested Development: Fateful Consequences... Tobias meets the new resident at Austerity, Lucille.