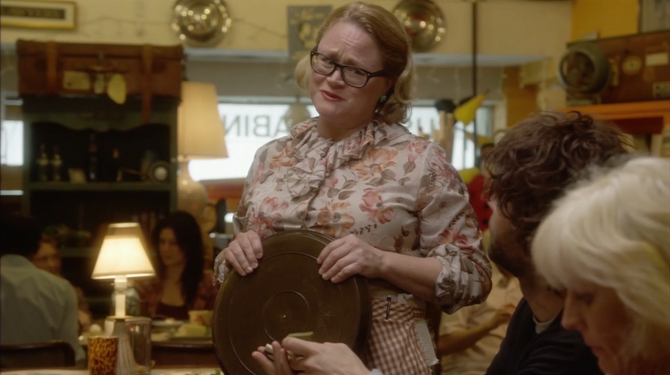 Loretta served Lucille and Lindsay at a Klimpy's restaurant and had to put up with their foul attitudes, even though she kept a positive attitude. ("Public Relations")

Loretta sued Skip Church's Bistro for making her gain weight after eating so many Skip's Scrambles. Her attorney with Maggie Lizer. ("Out on a Limb") It turned out that Loretta was pregnant, not fat. She was carrying the baby Maggie was supposed to be carrying for Officer Carter and Officer Taylor. ("Hand to God")

Loretta got a job at C.W. Swappigan's and served Lindsay, Tobias, Marky Bark, and DeBrie Bardeaux.She explained the swap-nature of the restaurant. ("Indian Takers")

Retrieved from "https://arresteddevelopment.fandom.com/wiki/Loretta?oldid=36014"
Community content is available under CC-BY-SA unless otherwise noted.