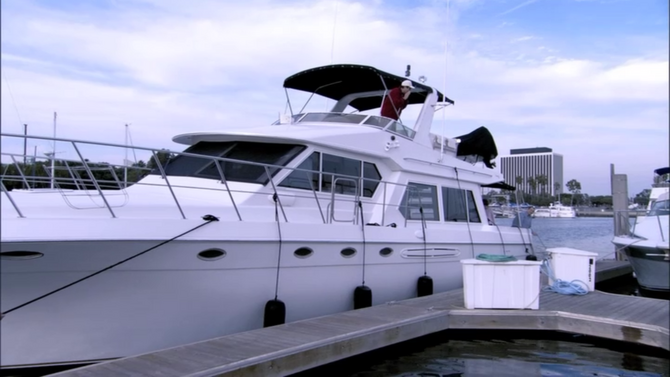 The Lucille is the Bluth family's first yacht
Appearances: "My Mother, the Car", "Pier Pressure", "Missing Kitty", "Not Without My Daughter"

The Bluth family owned a yacht named Lucille which G.O.B. temporarily lived on until he sank it in a magic show. He later bought a second yacht named The C-Word.

In "My Mother, the Car," a logo can be seen identifying the yacht as a Navigator 5500. It is approximately 55 feet long.

Michael decided to sell the family yacht to free up some money. G.O.B. had been living on the yacht part-time due to frustration and boredom in his relationship with Marta. G.O.B. decided to hire a crew and flee to South America but abandoned his trip to uncover Lucille's plot to deceive Michael. George Michael also visited G.O.B. on the yacht to ask for fake I.D.s to see Les Cousins Dangereux. ("My Mother, the Car")

Before his incarceration, the Lucille was a love nest for George and Kitty. It also held damning evidence against George's involvement with Saddam Hussein. George asked G.O.B. to make the evidence disappear. To redeem himself with the audience of Y.O.M. Spring Break: Newport Beach, G.O.B. performed a disappearing yacht illusion and sunk the into the harbor. However, Kitty was able to survive the explosion and steal a cooler full of evidence. ("Missing Kitty") Video of Kitty sneaking onto the Lucille is seen on a DVD of Girls with Low Self-Esteem. ("Not Without My Daughter")

Retrieved from "https://arresteddevelopment.fandom.com/wiki/Lucille_(yacht)?oldid=39893"
Community content is available under CC-BY-SA unless otherwise noted.