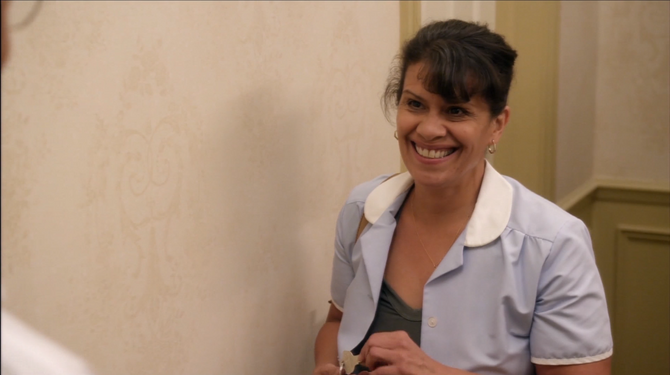 Lupe is Lucille Bluth's Hispanic housekeeper, who replaced her sister Luz. Lucille Bluth is frequently verbally abusive towards her.

Lupe is portrayed by BW Gonzalez and appears in 12 episodes of Arrested Development over all four seasons.

Lupe replaced Luz as Lucille's housecleaner, but Lucille didn't believe she was a good cleaner. ("Charity Drive") Lupe helps Lucille during her 2003 Christmas party, wearing a Halloween sweater. ("In God We Trust") Lucille looks through Lupe's bag before she heads home. ("Public Relations") Lupe helps with Lucille's Valentine's Day party / Anniversary party for Lindsay and Tobias. Lucille has her inflate lots of balloons, deflate them, then re-inflate them. ("Marta Complex") Lupe tries to take a soda from Lucille's apartment but is frightened by an unwitting Buster. ("Shock and Aww")

Lupe becomes upset with Lucille when she won't let her family use the Balboa Towers parking lot as a meeting place for her family reunion on Catalina Island but Michael lets her use the Bluth Company parking lot. Her family is tricked by Lindsay into riding atop the Stair car to the construction site to be scabs, but Michael calls it off. ("Staff Infection")

Lupe finds Annyong's passport in his room while cleaning, and discovers that he is 18 years old. ("Missing Kitty") She then serves food and drinks at Lucille's party for G.O.B.'s wife, wearing an old sweatshirt of Buster's. ("Best Man for the Gob")

Buster lived with her in Santa Ana temporarily when he was attempting to flee to Mexico to avoid his duty to Army. ("¡Amigos!") Buster also sleeps with Lupe when he feels depressed about his missing hand. Lupe is subsequently fired by Lucille for this indiscretion. ("The Immaculate Election")

Lupe, unexplainedly, has gotten her job as maid to Lucille back. ("For British Eyes Only") Presumably on Lucille's orders, she checks into rehab, posing as Lucille. ("Exit Strategy")

After Lucille's arrest and temporary incarceration, Lupe goes to visit her family, leaving Buster alone at home. ("Off the Hook")

Lucille: They didn't sneak into this country to be our friends.
From "Charity Drive"

→ See 21 pictures of Lupe at Images of Lupe.