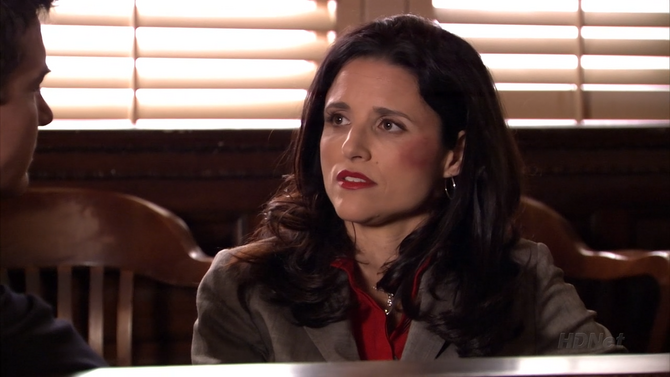 I'm Maggie Lizer. As in "Maggie lies her ass off".

Maggie Lizer is an attorney and on-off girlfriend of Michael. She uses many ruses to gain the sympathy of the judge and juries of her cases rather than fighting fair trials.

Maggie is portrayed by Julia Louis-Dreyfus and appeared in four episodes of Arrested Development over the first two seasons.

Maggie Lizer is a defense attorney in Newport Beach who was known for being blind. Although she has her vision, Maggie found that acting blind helped her cheat on her Law School Admissions Test (LSAT) and continued the ruse as it helped her get cheap pizza and win juries over. She even had a seeing eye dog named Justice to use in the act, but the dog was legally blind himself. ("Justice Is Blind")

Maggie and Michael Bluth start sleeping together as a one-night stand. Maggie later discovers his true identity during a shared court date, in which they appear on opposite sides of the court room, though she doesn't reveal as much right away. Although she is a pathological liar, Michael is attracted to her.

At a bar near the courthouse, Maggie ran into Michael and began flirting with him. He decided to take G.O.B.'s influence and take her home as a one night stand so he gave her the name "Chareth Cutestory". The two drank all night and spent the night together at Maggie's house. In the morning Michael connected the dots and realized she was blind. Feeling bad that he was lying to a blind woman he agreed to see her again. They went for a walk in a local park later that day.

At his father's plea hearing that evening Michael was shocked to find out that Maggie was the lead attorney for the prosecution. Barry and G.O.B. urged him to string her along and get information about the case for the good of the Bluth family. Michael went to her house to confess but before he had a chance to tell her she asked him to read case files from the Bluth trial. ("Altar Egos")

Michael confesses his true identity to Maggie but she tells him that she already knew and was just testing him. Finding it impossible to say goodbye, they sleep together one last time. George Bluth sends G.O.B. (who sends Tobias) to break in to Maggie's house and steal evidence but he is thwarted by Maggie's presence and accidentally sprays perfume in her eyes. Michael finds out that Maggie isn't actually blind by walking Justice (who actually is blind) and attempts to reveal it in court when he throws a Bible at her face. Blinded by the perfume, the book hits Maggie in the face. After court recesses, the two apologize for their deception and sleep together one last time. ("Justice Is Blind")

Michael runs into Maggie at the courthouse a year later and finds out that she is pregnant. He dumps his girlfriend Sally Sitwell because he thinks the child is his, even though Maggie tells him that it is definitely not his. Tobias and Lindsay break into Maggie's house to prove or disprove Maggie's pregnancy. They find a pregnancy suit and call Michael, who tells Maggie off. Lindsay calls again and tells Michael that Maggie is definitely pregnant after collecting urine from her toilet. ("Out on a Limb")

Michael attempts to straighten things up with Maggie and she forgives him but promises that the baby is not his and that she went to a sperm bank. Michael, thinking himself a decent man, promises to stay with her and help raise the child. To be certain he is not falling prey to another lie of Maggie's Michael tracks down a man who left an urgent note for Maggie. He finds out that Maggie is a surrogate mother to Officer Carter and Taylor. In a trial with Loretta against Skip Church's Bistro, Loretta's water breaks and Maggie fakes her water broke too. At the hospital, Michael sorts out that Maggie outsourced the baby to Loretta to both make some money and win the case against the Bistro. He and Maggie have sex one last time in the hospital before going their separate ways. ("Hand to God") 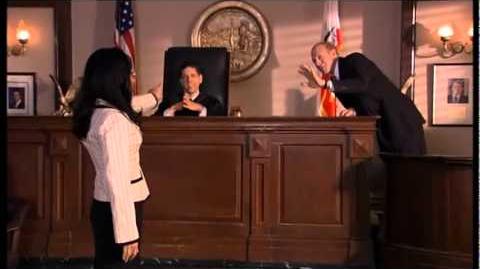