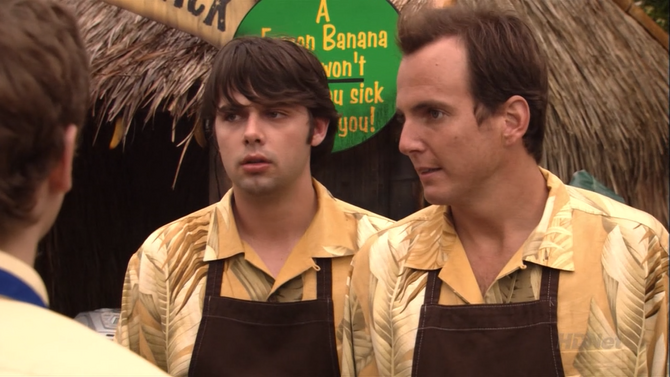 "Making a Stand" is the eighth episode of Arrested Development's third season.

Michael and G.O.B. set out to teach their father a lesson for his years of pitting them against each other; Lindsay and Tobias compete over Bob Loblaw; Lucille's post-op appearance inspires Maeby.

At a meeting at the Bluth Company, Michael tries to follow his father's wish that G.O.B. be included in the business. G.O.B. tries to introduce his new business idea accompanied by his usual magic trick fanfare, but his idea for selling the Bluth Company blueprints to "our Mexican friends down in Colombia" is shot down by Michael for not making financial sense, and for being illegal.

Michael's meeting with Lindsay sparks the recollection of George's ongoing scheme of goading Michael and G.O.B. into fighting each other, which George believed would make his sons tougher. In their youth, George had videotaped these encounters and sold the tapes under the series name Boyfights, which were accompanied by short films centered on Buster. Lindsay is in the midst of trying to attract her divorce attorney, Bob Loblaw, but he is still proving reticent.

Upon visiting Lucille in her apartment, Michael finds that she has enlisted painters to give the interior a new paint job. Lucille informs Michael that she will have to recuperate from her upcoming cosmetic surgery in the model home, while George remains at the apartment under house arrest. Michael finds out that G.O.B.'s Colombian plan had been instigated by their father, and feels that his father is still trying to create tension between Michael and his brother.

George had arranged a job for Buster at an Iraqi toy shop, but upon finding out that the toy shop owner wanted to employ him to use his lack of a hand to scare off shoplifters, Buster had quit. Meanwhile, Maeby is at a test screening of the studio's new horror movie, and upon seeing that the audience find the bloodsucker laughable, her colleague Mort Meyers tells her that she has a week to fix the problem.

Michael meets up with G.O.B. to try to create a new start for them working together away from their father's influence, and suggests that G.O.B. open a banana stand of his own, which meets with a very happy reaction. Soon after, George Michael calls Michael to inform him that G.O.B., along with Steve Holt, has set up his new banana stand a short distance from the original banana stand, and is going about winning business in an aggressive fashion.

Over at the attorney's office, Bob Loblaw introduces a young inexperienced attorney to Lindsay to act as her new representative, and as they enter a meeting room to find Tobias, Lindsay finds out that Loblaw has defected over to the side of Tobias, and is now acting as his attorney. Buster brings a post-op Lucille, who is covered in bandages, and unable to speak properly, to the model home. He tells Michael about his encounter at the prosthetics shop with the amputee J. Walter Weatherman, who George had used in order to teach the Bluth children lessons many times in the past.

Upon hearing from his father that G.O.B.'s banana stand had been making a lot of money, Michael, with a banana-suited George Michael in tow, sets off for the boardwalk, the site of the stands. Later on, in the middle of the night, as Maeby is surprised by the red, blistered, and bruised, face of a post-facelift Lucille, she screams and realises that she has found the face of the monster to save her horror movie.

At the banana stands, Michael and G.O.B. are embroiled in competition using increasingly desperate tactics, including scantily clad women, fire balls, and George Michael propelled by a jetpack. As events disintegrate into yet another fight between Michael and G.O.B., Michael finds out that George was behind the banana stand idea as a way of laundering money for the Colombian deal, and formulates a plan for the two brothers to get their own back on their father.

As G.O.B. and Michael discuss their plan, which uses J. Walter Weatherman, they find out that Buster disapproves of their use of a one-armed man, but all are distracted by the shock of spying Lucille's post-op face. Michael and G.O.B. go to tell their father that they had put a stop to the Colombian deal and warn him that the Colombians may have reason for revenge. Michael asks the Guatemalan painters working in the apartment to help out with the plan by posing as kidnappers while G.O.B. tells his father that Michael is planning to fake a kidnapping to scare him.

At the arbitration between Tobias and Lindsay, Bob Loblaw is using his knowledge of Lindsay's flirtation with him as evidence in trying to win the case for a very grateful Tobias. Maeby's scary photograph of Lucille is met with approval from Mort Meyers.

George calmly waits for the fake kidnapping, but after the kidnappers arrive, is felled into a metal trunk by one of his disgruntled disguised employees. While he is trapped in there, Michael and G.O.B. set about re-building G.O.B.'s banana stand, to stand in as a South American hut, inside the apartment. Once George is released from the trunk inside the fake hut, he is greeted by G.O.B., Michael and the painters, disguised in balaclavas, who then attempt to threaten and frighten him. Just as Michael is about to reveal his identity, George grabs a gun and starts shooting. Just after a man's arm flies off, Michael realises that the man must be J. Walter Weatherman, and that his father has turned the tables in a plan of his own.

As G.O.B. and Michael start to fight, ostensibly because G.O.B. had spoiled Michael's plan, they roll out of the hut and Michael appears to have fallen over the balcony. After George panics, Michael reappears, unhurt, having directed his own lesson towards his father. Meanwhile Buster has picked up a gun, and he is targeted by policemen wielding guns themselves. The policemen shoot when Buster does not drop the weapon as ordered and his hand flies off, spurting blood, causing G.O.B., Michael and George to panic. Michael quickly realises that it was Buster's fake hand that was shot off. Buster had a lesson of his own to teach: that they should not use a one-armed man to scare someone.