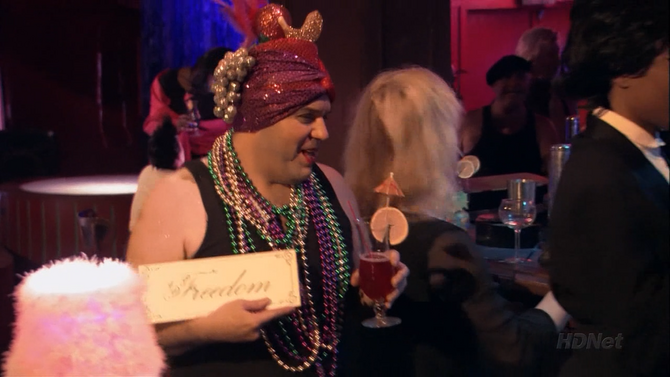 A man who fights for freedom and gay rights. He wears a garish outfit including fruit on his head, and carries a "Freedom" sign.

While the Bluths were on the Marina Hornblower for George's retirement party, he was part of the protest of the yacht club's ban on gay marriage at sea. Tobias was accidentally with them on the protest. ("Pilot")

Later, the man was seen in the same outfit leaving the Gothic Asshole. ("Storming the Castle")

He also joins Lindsay and other protestors in a Free speech zone to protest the war. ("Whistler's Mother")

The man attends a reading by Tobias of his book The Man Inside Me at Livres Aux Folles. ("Let 'Em Eat Cake")

The man is later seen at the Tobias is Queen Mary in his typical atire. ("Queen for a Day")

Retrieved from "https://arresteddevelopment.fandom.com/wiki/Man_with_%22Freedom%22_sign?oldid=38789"
Community content is available under CC-BY-SA unless otherwise noted.