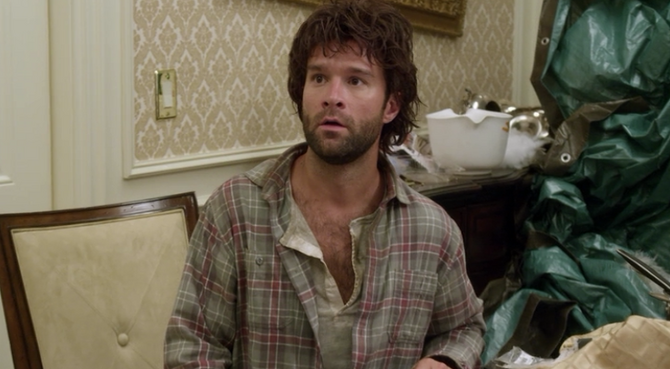 Marky Bark is an Ostrich Farmer and Activist. He also has prosopagnosia (Face Blindness), so he can only recognize people by voice or if they flat-out tell him who they are. Marky owns a AMC Pacer and a trailer, which he lives in and uses to travel around. Marky is the son of Johnny Bark and of Joan Bark.

Marky tries to help his girlfriend DeBrie recover from her opioid addiction, by taking her to a Methadone Clinic; where Marky Bark meets Lindsay. Lindsay is attracted to his care-free nature and disregard for authority. Marky tells Lindsay that he has an ostrich farm and this leads to Marky leaving DeBrie and starting a new life with Lindsay on his ostrich farm. (4x03 — "Indian Takers")

Marky and Lindsay then leave the Ostrich farm and move into Lindsay's mother's vacant penthouse with Cindy the Ostrich. A year after living at Balboa Towers, Marky's activism has grown stronger. He plans to make a glitter bomb which he will trigger while Herbert Love is campaigning at The Century Plaza. Initially reluctant to go to such measures, Lindsay finally agrees and provides the blue glitter. At the Century Plaza Marky hides inside Herbert Love's podium and waits for Lindsay to release him. She gets caught up flirting with Herbert Love and the bomb explodes with Marky still inside the podium, causing him to "blue himself" with the blue paint and glitter. Marky is arrested and thrown into Orange County Prison where he is charged with "Non-Arab terrorism". After Marky Bark is released from Orange County Prison, Marky bumps into Lindsay outside the Ealing Club. (4x08 — "Red Hairing")

A couple of days later Marky decides to try and get Herbert Love again by blowing up his campaign float at Cinco de Cuatro. He boards a boat of a wigged Tobias, thinking it is Lindsay. (4x9 — "Smashed") He places a suitcase bomb on Love's float but just as he and Tobias recognize Lindsay on Love's float, they shout for her to get off of the platform before the bomb explodes. However, Marky accidentally put Tobias' luggage suitcase on Love's float and left the bomb suitcase on his boat. The boat explodes with Marky and Tobias on board. (4x10 — "Queen B.")

Marky wants to place a paint bomb at Newport Beach, but the bomb explodes while he is driving to Newport.