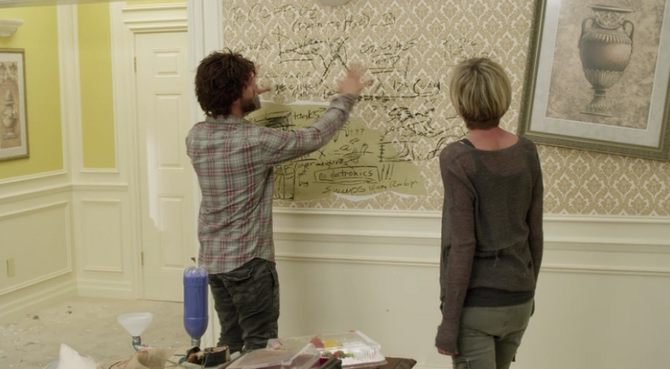 Marky Bark's Glitter Bomb was supposed to be triggered during Herbert Love's Congress Campaign at The Century Plaza, but it didn't go according to plan.

Lindsay finally agrees and provides the blue glitter. At the Century Plaza Marky hides inside Herbert Love's podium and waits for Lindsay to release him. She gets caught up flirting with Herbert Love and the bomb explodes with Marky still inside the podium, causing him to "blue himself" with the blue paint and glitter. Marky is arrested and thrown into Orange County Prison where he is charged with "Non-Arab terrorism". ("Red Hairing")

A couple of days later Marky decides to try and get Herbert Love again by blowing up his campaign float at Cinco de Cuatro. He boards a boat of a wigged Tobias, thinking it is Lindsay. ("Smashed")

Retrieved from "https://arresteddevelopment.fandom.com/wiki/Marky_Bark%27s_Glitter_Bomb?oldid=39296"
Community content is available under CC-BY-SA unless otherwise noted.