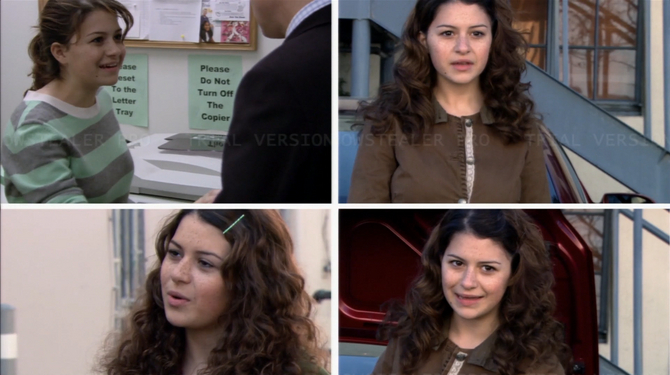 "Marry me!" is a recurring quote usually said by Maeby Fünke when people grew suspicious of her young age.

Mort Meyers: Well, if you want to get it made, I’m the guy who has to see it. You’re the Fünke everyone’s talking about? What are you, like, 15?

Mort Meyers: Everyone thinks I look young too. So, who you thinking about?

Mort Meyers: Did you get the stack of scripts that I sent you? ’Cause you certainly look well-rested.

Mort Meyers: Ha! I need your notes on those tomorrow. You want to have a drink?

Maeby: Yeah. Why don’t we ask your wife to come with us?

From "Queen for a Day"

Michael: Yeah. Why aren’t you in school right now?

Executive: I’m sorry, I can’t read what you wrote on this buck slip. You got the handwriting of a 15-year-old.

Jeff The Reader: Hey, I’m almost done with that coverage. I can bring it out to you tonight. Are you still at the Balboa Towers?

Narrator: Maeby had used her grandmother’s address so as to not arouse suspicion at home. This required convincing the guard she was several years younger than her age.

Mario: Boy, you get a lot of mail from that movie studio.

Maeby: I write a lot of letters to movie stars.

Mario: You seem a little old for that.

Jeff The Reader: That place seems so old for you.

Maeby: I’ll send Dr. Epstein your compliments. And may I add, “marry me”?

Rita: Good-bye, Michael. You know, I really did fancy you. I can’t stay here now.

Michael: Even if we’re not related, I think I would like for you to work here. You’re very, very good at it. What you do for a job is not really a great way to make a living, you know?

Michael: Marry me! ...It’s weird on so many levels.

Ann: We had a great night together. I understand if you need your space.

Narrator: Of course G.O.B. meant it in the showbizy way his niece had always used when she was accused of being too young. But like many evangelicals, Ann took it literally.

Maeby: Anyway I guess that's why I can't make a relationship work. Does that upset you?

Stan Sitwell: Annette, it does, if you must know the truth, 'cause your dad was a damn fool. I see the real you: a special, wonderful, unique 67-year old woman who amazes me every day.

Narrator: And that's when Maeby realized what it was about Stan's behavior that was so confusing.

Stan Sitwell: It would be my pleasure to be the man in your life that your father never was.

Stan Sitwell: It was paternal, and, touched, all she could think of to say was...

From "Emotional Baggage"
Retrieved from "https://arresteddevelopment.fandom.com/wiki/Marry_me!?oldid=53201"
Community content is available under CC-BY-SA unless otherwise noted.