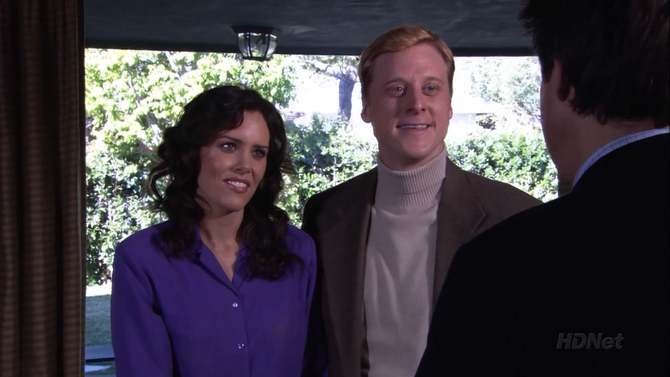 "Meat the Veals" is the sixteenth episode of Arrested Development's second season.

Oscar wants to throw Lucille a party to celebrate her wedding anniversary. He got the idea from Buster, who said that it would show how Oscar has been there for Lucille while George Sr. has been a fugitive. Upon hearing of the party, George Sr. concocts a plan to win back Lucille by renewing his vows. He enlists G.O.B. to abduct her and take her to Church of the Good Shepherd. Tobias continues to disguise himself as Mrs. Featherbottom, unaware that everyone knows that it is him. The others are taking advantage of this; Maeby is getting her ironing done, and Lucille uses him for catering. George Michael has decided to ask Ann if she will get pre-engaged to him. Michael is against the idea, and meets with Ann's parents, thinking that they will feel the same way. It turns out that they support the pre-engagement, so Michael invites the Veals to the party, thinking that they will see how dysfunctional the Bluths are.

However, at the party, the family is surprisingly normal, to Michael's annoyance. He convinces George Michael not to go through with the pre-engagement. However, after Ann's mother starts kissing Michael on the balcony and George Michael sees this, he goes ahead with it. G.O.B., Franklin and George Sr. abduct Lucille (knocking her out with ether put on G.O.B's puppet Franklin) and take her to the church in which Ann's father, a pastor, is presiding. The whole family arrives at the church, and two fights ensue — one between Oscar and George Sr. over Lucille and the other between Michael and Pastor Veal over Mrs. Veal. When the police arrive, George Sr. escapes wearing Tobias's Mrs. Featherbottom wig, George Michael talks Ann out of marrying him, and Buster's hook hand gets confiscated by the police after a drug dog pounces on him (resulting in Buster using Franklin the puppet as a temporary substitute, despite Lucille's objection).