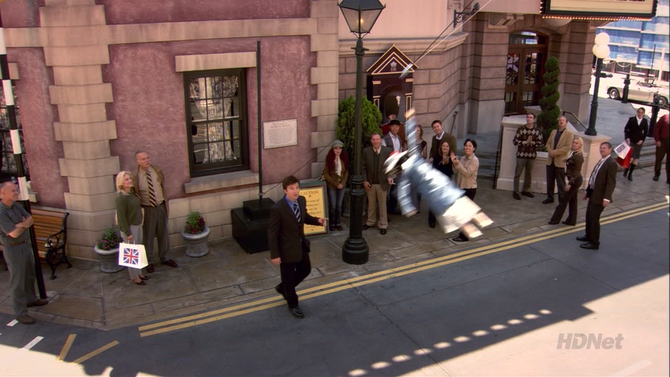 Merry Poppuns is a feature of Wee Britain
Appearances: "For British Eyes Only", "Forget-Me-Now", "The Ocean Walker"

Merry Poppuns is a tourist attraction in Wee Britain. A fictional character, a model of her knocks Michael to the ground during several visits to the area.

When Michael is struck a third time by merry popping, there is signage that reads, "Please stay off my landing port, I'm not the tourist killing sort... But if you have a working girl to kill, please let her stay while I do my will." This, of course, is a nod to Michael's poor flirting and his allusion to Jack the Ripper in previous episodes.

The Legend of the Merry Poppuns: Ms. Poppuns is an original creation of Wee Britain and is in no way meant to invoke the character of the popular novel, musical or stage show ‘Mary Poppins’. Our Ms. Poppuns has neither the trade-markable qualities of being a nanny nor the power of flight, but instead is a cleaning woman who transports herself with the aid of a guide wire and a sturdy cane as she fights the likes of Jack the Ripper every weekday at quarter past and half after every odd Greenwich mean hour.

When Michael first visits Wee Britain he is struck by Merry Poppuns while saying farewell to Rita. The accident is covered on FOX 6 via WeeBBC. ("For British Eyes Only") He is struck a second time when telling her farewell after leaving Fat Ammy's on their date. ("Forget-Me-Now") He is struck a third time after he and Rita zipcord down the line from Rita's apartment to flee Uncle Trevor, who locked Rita in her apartment to prevent her from marrying Michael. ("The Ocean Walker")

Retrieved from "https://arresteddevelopment.fandom.com/wiki/Merry_Poppuns?oldid=47978"
Community content is available under CC-BY-SA unless otherwise noted.