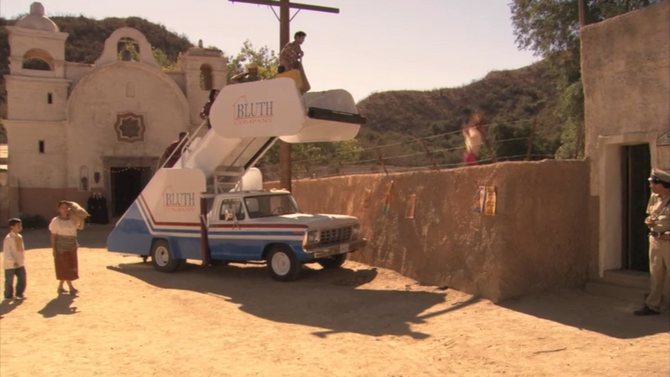 Mexico
Appearances: "The One Where They Build a House", "¡Amigos!", "Good Grief", "Development Arrested" — Mentions: "Bringing Up Buster", "Spring Breakout", "Family Ties", "Self-Deportation", "Everyone Gets Atrophy"

The Bluth family visit Mexico on a regular basis.

After escaping prison, George Bluth flees to Mexico with Kitty. After escaping Kitty's hotel room he is arrested by Mexican police under suspicion he is Oscar Bluth for selling marijuana. When he convinces them he is George they incarcerate him for an outstanding warrant for selling the illegal Cornballer. ("The One Where They Build a House")

After being sent to Mexican prison, George finds a loophole to get out: he bribes the guards. When bounty hunter Ice tracks him down, Michael, George Michael, Maeby, Lindsay, and Ann head down to Mexico to track him down. Michael then pays Ice and Gene Parmesan to act as G.O.B.'s friends and track down George. He mistakenly leaves Ann in Mexico but returns to get her. ("¡Amigos!")

Buster, attempting to escape his duties to army attempts to flee to Mexico but ends up at Lupe's house and can't tell the difference. ("¡Amigos!")

Ice eventually tracks down George Bluth and reports him as dead in a Mexican prison to the Bluth family. In reality, he bribed his way out of the prison and was hiding in a hole in the Sudden Valley subdivision. ("Good Grief")

It is revealed that George had built a model home in Cabo San Lucas, Mexico. After the SEC arrested his mother, Michael decided to take a vacation to the house with George Michael. His father stowed away The C-Word too. ("Development Arrested")

Oscar invited George to see their shared land on the border of Mexico, where they all ate the maca plant and sat in a sweat lodge. George bought the land to gouge the government when they wanted to buy it, but the Mexico wall plan stalled so he came up with a plan to make money in the meantime: build a "Sweat and Squeeze" lodge where he would have Oscar take CEOs into a sweat lodge for an hour, then swap with his twin brother to charge them $10,000 or more for a cup of lemonade. ("Borderline Personalities")

Upon realizing Lindsay's testimony needed to be believable in order to receive any stimulus money, Tobias and Lindsay decided to visit a "Method Acting clinic", actually a methadone clinic. Lindsay again lost hope in Tobias and ran into Marky Bark; Lindsay thought Marky's ostrich farm was a divine sign so she and Marky absconded to start a new life together. Although the lovemaking was short and the dance sessions long, Lindsay became happy. Until she woke up under a giant pecking ostrich. ("Indian Takers")

After the catastrophe of Herbert Love's Congress Campaign, Lindsay leaves Orange County, California and heads down to Mexico; attempting to pass the border in her limousine without a passport. ("Family Leave")

George Senior and G.O.B. travel through Mexico trying to find their sexual vigour, but they reject even two hot Mexican cousins. George Michael, Maeby and Steve Holt decide to go to Mexico. They cousins encounter cowboys telling them to leave their land and the signs now read MRF. Steve Holt decides to go back home. Maeby tries to hitchhike back to America but accidentally took a ride to the border with some volunteers sent to help those who were displaced. She decides to stay and help distribute water to the less fortunate. George Michael continues to have a good time in Mexico because he is hanging with a bunch of white guys named Noah. ("Self-Deportation")

In Mexico, while having lunch with Oscar, Lindsay got a call from her mom asking her to run for office. Lindsay, in turn, called Maeby and asked her to be her campaign manager. ("Everyone Gets Atrophy")