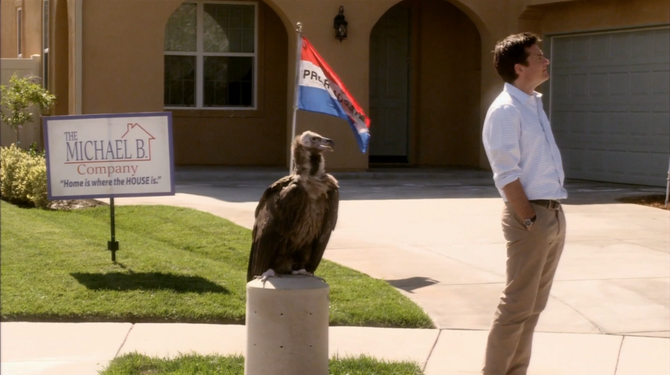 Michael B. Company
Appearances: "Flight of the Phoenix", "The B. Team", "Double Crossers", "A New Attitude"

The Michael B. Company is Michael Bluth's solo real estate company. The company's slogan is "Home is where the HOUSE is."

He bought Sudden Valley from the Bluth Company and finished the development. Shortly after construction ended in 2007, the California housing market collapsed. On May 1, 2008 Michael borrowed $700,000 from Lucille Austero to keep him afloat but by Cinco de Cuatro 2012 he had spent it all, despite having an article printed in Altitude magazine. ("Flight of the Phoenix")

After Pete the mailman died and Michael moved into his son's dorm, the houses were used by the crew of John Beard's To Entrap a Local Predator: Orange County Edition: Super Creep. ("A New Start")

At the request of George, Michael hired G.O.B. to sell the houses of Sudden Valley. As a registered sex offender Tobias needed a house far from schools so he bought the model home. ("Smashed") G.O.B. then sold the rest of the homes to other sex offenders, causing Michael to fire him and kick him out of the Untitled Michael B. Project. ("A New Attitude")

Retrieved from "https://arresteddevelopment.fandom.com/wiki/Michael_B._Company?oldid=32438"
Community content is available under CC-BY-SA unless otherwise noted.