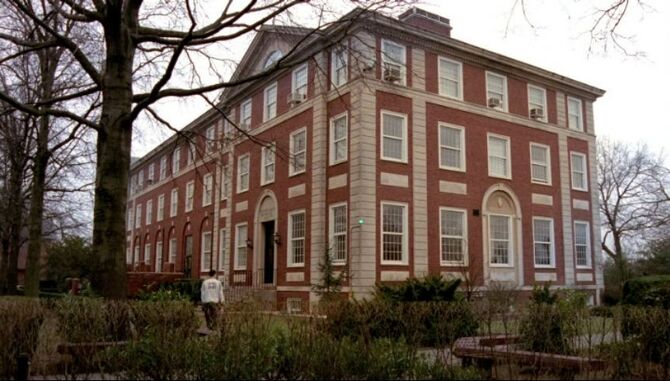 Founder Earl Milford: Children should be neither seen nor heard.

The Milford School or Milford Academy is an institution that various members of the Bluth family have attended. It encourages that children should be neither seen nor heard. The school was founded by Earl Milford and later run by his slightly more liberal son, Charles Milford, who introduced the "Talk Room".

Buster enjoyed the Milford School so much that he managed to stay there two semesters after his graduation. He used his blending techniques that he learned at Milford to hide from public view when Jessie suggested he do so. ("Public Relations")

In a flashback, a young Buster is seen wearing a polo from the Milford School. ("Good Grief") Buster is frightened that Lindsay may have sent Maeby to Milford when she calls Openings "the most prestigious school". ("S.O.B.s")

It is revealed that Buster won "Least Seen In Campus". ("Self-Deportation")

George Michael was never a student at the Milford School, but Michael Bluth was pushing to get him in. He was rejected due to the Bluth family's poor publicity, notably a recent fight between Lucille and Lindsay at a Klimpy's. Michael hired Jessie to clean up the family's image in the hopes of getting George Michael accepted, but he eventually told his father that he was not interested in attending, so Michael dropped his pursuit. ("Public Relations")

Lucille sends Annyong to the Milford school to teach him a lesson, but she later forgot what that lesson was. ("Afternoon Delight")

Earl Milford: Children should be neither seen nor heard.  From "Public Relations"

Michael: You can always tell a Milford man.

Lucille: Michael, a mother doesn’t have a child to give herself company. Annyong was to teach Buster a lesson.

Michael: And where is that little lesson?

Lucille: I sent him to the Milford Academy to teach him a lesson. I can’t remember about what.