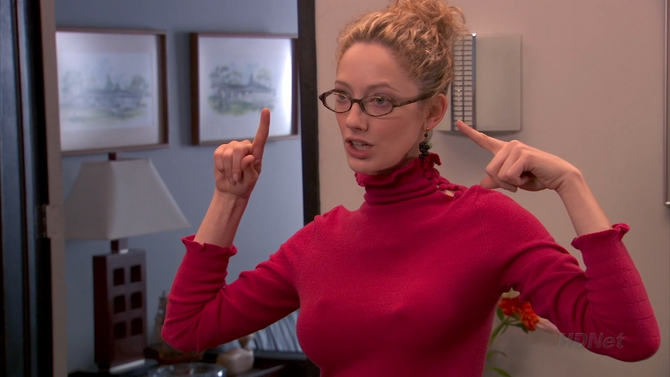 "Missing Kitty" is the eighteenth episode of Arrested Development's first season, although it was produced and written as the sixteenth episode.

G.O.B. attempts to make good on his promise to make the family yacht disappear. Meanwhile, Lindsay and Maeby try to track down Lindsay's grandmother, Tobias seeks George Sr.'s respect, and Michael attempts to fire Kitty, who claims to have information that could bring down the company.

G.O.B. practices a card trick with George Michael in the model home. Michael urges his excited son to be wary of G.O.B.'s lifestyle. G.O.B. asks to borrow the family's yacht for an illusion at this year's Y.O.M. Spring Break: Newport Beach party. Michael declines.

Later, George Michael watches G.O.B. perform illusions for coeds on the yacht. Michael arrives and takes his son back to the Bluth Company offices. G.O.B. promises to keep away from George Michael if he can use the yacht in his magic show. Michael agrees.

During the Y.O.M. show, G.O.B. shows the crowd the yacht then entertains them with music and dancing. He drops the curtains and shows that the yacht has disappeared to a roaring crowd. Celebrating with Michael, his mother, and Annyong he reveals that he sunk the $700,000 yacht, but that it had $900,000 worth of insurance.

Kitty returns to work at the Bluth Company after returning from a two-week medical leave. Michael is astonished to learn that her leave was to get breast implants. Before she can get any work done she tells Michael she is leaving for a two-week Spring Break holiday. Michael fires her but she laughs it off, telling him he doesn't have hiring and firing power.

Michael goes to prison where his father tells him he doesn't have hiring and firing power and that Kitty has information that could be used to keep him in prison. Michael finds her at a nice steakhouse and offers her the job back but her rude attitude makes him fire her again on the spot. She makes a scene, claiming that Michael is threatening her.

Later, Kitty sneaks onto the Bluth's yacht to steal coolers of evidence labeled "H. Maddas". The yacht is blown up by G.O.B. but Kitty survives, holding onto the cooler.

In prison to prepare for the role of Frightened Inmate #2, Tobias has been traded by George to be bunkmates with White Power Bill. Tobias speaks with Warden Gentles who pressures Tobias to learn real fear from Bill. Tobias instead using his therapist skills into revealing the source of Bill's real hatred—his father. Bill jumps to his death and Tobias is heralded as "Dorothy" of the prison.

Tobias then asks to speak with George, who is reluctantly ushered in by "friends of Dorothy". George tells Tobias he hates him because he took Lindsay away and that he may never see her again as a free man. Tobias then realizes the true source of fear is anger.

After a birthday card with money fails to arrive, Lindsay and Maeby hunt down their "Nana" (Lucille's mother). Lucille did not tell the family that Nana had died six months previous in order to keep the inheritance money to herself. After visiting with the incorrect elderly woman for ninety minutes, Lindsay and Maeby met with a banker who revealed Nana's death. Lucille had, by then, already hidden the money in a trust fund for Annyong.

On the next... Arrested Development

"Lupe makes a startling discovery and Michael finds himself in the middle of the search for a missing Kitty."