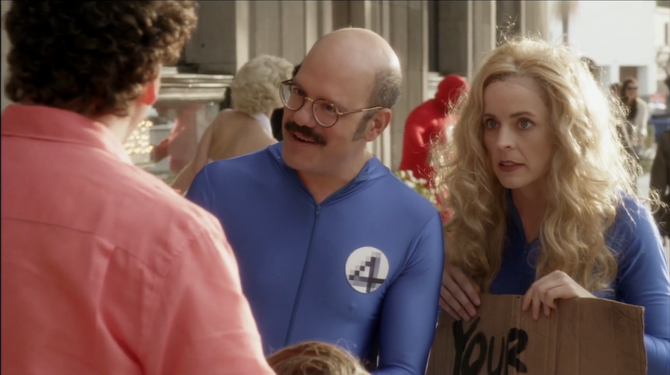 "Modern Marvels" was the ninth episode of chronological re-cut of Arrested Development's fourth season. It premiered on Netflix on May 4, 2018.

George Michael attempts to follow his musical dreams. G.O.B. tries to keep his new friends. Tobias passes up a job, then lands in a rocky situation.

The army are helping Buster to train his new mechanical hand with little success. They want to use Buster as a "killing machine" while Buster just wants the army to be his new family which is why he intentionally fails their tests. Meanwhile, at C.W. Swappigan's, Tobias connects with DeBrie over their acting experiences and they decide to run away together. However, before that can happen, DeBrie passes out and Tobias rushes her to the hospital. DeBrie is touched that Tobias didn't desert her although he is surprised to know that she is a drug addict as he believes they met at an acting class. He convinces her to sign out of hospital so she can pursue her acting career.

G.O.B. has been discharged from the same hospital and phones his son Steve Holt so they can meet later that evening. G.O.B. opens up to Steve at the bar, although he doesn't recognise his initially, and Steve offers him a job at his pest control business, beginning the next morning. Meanwhile, the army begins to realise that Buster doesn't want to leave so they decide to give him the Q test. Buster is told to kill a kitten with his new hand but he can't do it because it is the "cu-test".

At the nightclub, G.O.B. continues to party in order to celebrate his new job. His illusions are noticed by John Beard Jr. who wants G.O.B. to perform a trick for popstar Mark Cherry. His entourage are impressed by him and so is the actress Rebel Alley. When the paparazzi appear, G.O.B. distracts them with his magic and is accepted into the group. However, because of his partying, he misses starting his job with Steve Holt who isn't surprised.

Tobias keeps pushing DeBrie to act but she must be rushed to hospital again. He decides he will help her by letting her play Sue Storm in The Fantastic Four again. They go to Hollywood Boulevard dressed as Johnny Storm and Sue Storm although no one wants pictures of them. Tobias makes his own Thing costume to help with public recognition but this gets them a cease and desist letter.

Buster must leave the army after failing his test. On his way out, he is stopped by Ophelia Love who is shocked how a veteran like him has been treated. Ophelia thinks that her husband, Herbert Love, can help him. Tobias and DeBrie continue to dress up although not on Hollywood Boulevard. This doesn't stop them from getting another cease and desist. DeBrie is concerned that they might get a third strike but Tobias is determined to continue. DeBrie grows desperate and tries to sell herself but Tobias stops her.

G.O.B. keeps partying with Mark Cherry's entourage although he is mainly there to be their limo driver. Buster, however, is welcomed into the Love family.

On the next Arrested Development: Fateful Consequences... Tobias returns to Balboa Towers in order to ransack it but finds that it is already a mess. He then hears Lucille 2 being attacked by an ostrich and rushes her to the hospital.