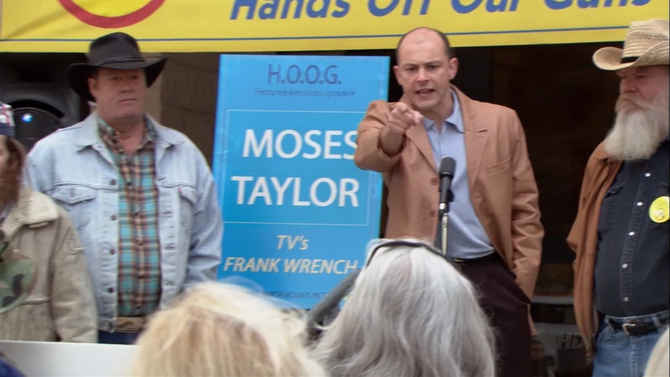 Moses Taylor is an actor (in the Arrested Development universe) who plays Frank Wrench. His name is a reference to Charlton Heston, an actor and gun rights advocate who played Moses in The Ten Commandments and George Taylor in Planet of the Apes.

Moses Taylor, an American actor and gun rights advocate, catches the eye of Lindsay Bluth Fünke who is exploring an open relationship with Tobias. She flirts with him at a gun right rally and later meets up wearing a fur coat. Mistaking her for a wild wolf, Tobias accidentally shoots her with a tranquilizer gun. Moses, trying to escape the "Moses Taylor hunts people" rumor published by the British Sun Times dumps the unconscious Lindsay on a bus bench. ("Burning Love")

When Tobias is living on the Tantamount Studios studio lot, he sleeps on the Wrench set and uses the restroom, which appalls Moses. ("Out on a Limb")

Retrieved from "https://arresteddevelopment.fandom.com/wiki/Moses_Taylor?oldid=32451"
Community content is available under CC-BY-SA unless otherwise noted.