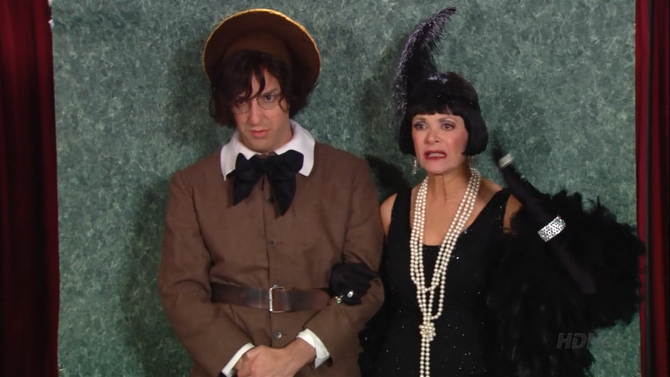 Lucille abducts George Michael for a mother-son dance; Buster adjusts to having a hook for a hand; G.O.B. reunites with his estranged wife; Tobias stars as George Sr. in a biopic about the Bluth family, which causes Lindsay to become more attracted to him.

"Michael Bluth got up early in the hopes of avoiding his family. His mother, however, was already dressed, made up and waiting for him. Which put her wake-up time in the 3:00, 3:30 area." Lucille always has trouble sleeping this time of year because she gets excited before Motherboy, a dinner dance aimed at promoting mother/son bonding. Lucille has gone with Buster over 25 times, and on several occasions they have won "Cutest Couple". But for Motherboy XXX, Lucille wants to take Michael, because Buster has become moody after losing his hand. Michael chides his mother for not being there for Buster the one time that he finally needed her. Lindsay is also up early, upset that Tobias has re-connected with acting coach Carl Weathers. Tobias is excited about a possible role in Carl Weathers' latest television project, but Lindsay complains that Tobias always blows these chances and that he's not a take-charge husband. Up in the attic, George Sr. has to hide when Maeby and George Michael come up looking for camping gear for George Michael's upcoming Christian camping trip with Ann. Michael later catches news of the trip from George Sr., who overhears everything while hiding.

Michael tries to talk his son out of going, but when Maeby hears that George Michael would be missing school for this trip, she decides to join him. Michael tells George Michael that he thinks he should spend time with Uncle Buster instead. At the office, Michael runs into G.O.B., who wants to know if Barry has mentioned his divorce case. He also mentions that his soon-to-be ex-wife is claiming that the seal G.O.B. released into the ocean (which later bit off Buster's hand) was worth $250,000. Michael tells G.O.B. that if he admits he never consummated the marriage, he can have it annulled. But G.O.B. can't admit that, not even to Michael. Barry arrives and announces that the seal has been tracked and caught. If Buster's hand is still intact, a transplant may be possible. Tobias meets with Carl Weathers at Burger King. Carl announces that he's directing an episode of Scandalmakers. It will be about the Bluths, and Carl will appear as Ice. He doesn't want Tobias for a role, only to sign a release, but he is willing to give him the role of George Sr. in exchange for that signature. George Michael spends an afternoon with Buster, and Lucille sees an opportunity to take a new boy to Motherboy.

Michael and G.O.B. set out to find the seal. Buster finds out and joins them. At home, Tobias begins to do some research on George Sr. in the attic. Angry that Tobias can't master his voice, George Sr. appears and threatens Tobias, which makes Tobias see the power in the man. Tobias asks George Sr. to teach him this power. Down at the docks, the search continues for Buster's hand, but they find only the seal's left flipper, which was probably bitten off by a shark. Michael argues that, like Buster, the seal couldn't survive in the real world. They set off to save George Michael from Lucille instead. Lindsay sees Tobias with the raw power of George Sr., which she is immediately attracted to. Buster and Michael arrive at the hotel in which Motherboy is being held. Seeing another matching sailor outfit, Buster knows that Lucille is in her room changing outfits. He also knows that she will make George Michael wait on a balcony. Barry prepares G.O.B. to meet with his wife.