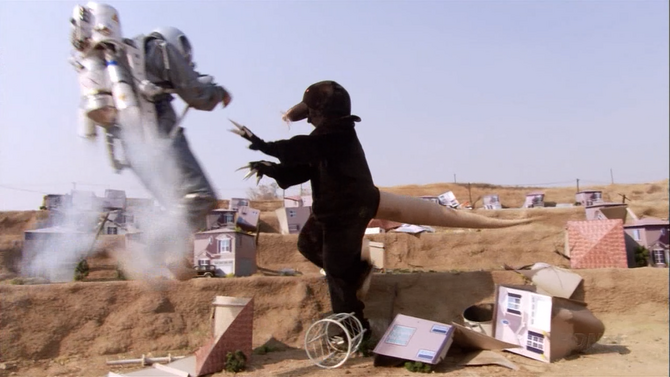 Moles underground alert the Bluths to a mole in their company; Tobias mistakes a CIA agent for a theatrical one.

Michael Bluth sneaks out of work to see a British film, Love, Indubitably, with Rita, his English girlfriend. Afterwards, they come upon a toy store, and Rita tells Michael he should buy a train set for George Michael for his birthday. Michael, however, has already purchased George Michael’s big birthday gift: a Jack Welch suit and a copy of Quicken. Although he cannot tear himself away from Rita, Michael feels that he has been neglecting his job. In an effort to compromise, he and Rita go to one of the Bluth Company's development properties, to see if the land is ready to be built on. It isn't. When Michael and Rita climb up the hill, the ground gives out beneath them, and Michael realizes that he may have a mole problem.

Rita returns home, where she is questioned by the man she is working with, as to why she hadn't been at the school that day. He tells Rita that they are there to learn, not fall in love. Rita tells him that she is tired of his orders, and that she can't help falling in love. He shows her a gold star, and reminds her of the oath she had taken in order to receive it. Michael returns home as well, only to find Tobias on the floor. It seems as though getting 4,000 hair plugs in one sitting is beginning to take a toll on Tobias's health. He is also exhausted from the time he has been spending at the gym with his friend, Frank. Frank is an agent that wants to work with Tobias. Frank actually works for the CIA, but Tobias thinks he works for CAA, a talent agency.

Michael tells Tobias that he needs to focus less on himself and more on his daughter, because her grades are terrible. In fact, Maeby has already received her first “F”, but not from school. "Love Indubitably", a film Maeby has overseen while working as a studio executive receives an "F" from Entertainment Weekly and is losing money. Maeby’s solution is to change the "Hell Tunnel" on the studio tour to the "Tunnel of Love Indubitably". Lindsay, also in the room, scoffs at Michael’s criticism because she feels he has been ignoring the family since Rita came into his life.

When Michael returns to the office, Lucille, G.O.B., Buster and George's surrogate, Larry Mittleman, are in the board room waiting for him. The family has a meeting with their attorney, Bob Loblaw, who explains that the Japanese investors have heard about the mole problem and are coming to check out the development property. As a way to fool the investors, G.O.B. suggests building a tiny model town, like in the Godzilla movies, and then show it to the Japanese investors, as if it were far away. Bob warns the family that no money should be transferred, as it will constitute fraud. George agrees, and tells everyone that life isn't a Japanese movie where the hero puts on jet pants, like Astroboy, and saves the day. But it does give him an idea how to escape the penthouse, so he tells G.O.B to expect a package to be delivered to the model home.

Bob, concerned about how the Japanese were alerted, warns Michael that the family might have a "mole", or a spy. He tells them that the "mole" may be someone British. The family immediately suspects Rita, but Michael denies telling her anything. Bob says his informants tell him the spy goes by "Mr. F". Upset with his family for thinking he spends too much time with Rita, Michael storms out, calls Rita, and the two make plans to go to the "Tunnel of Love Indubitably" the next day.

Before Michael leaves for his date with Rita, he tells his son he has a fun new birthday present for him. Soon after, Larry arrives at the model home to pick up the package George had shipped there. But the package at the front door is not the jetpack George had ordered, but the train set Michael had gotten for his son. George figures the Japanese website he ordered from has screwed up the delivery, and decides to soothe his anger with an ice cream sandwich. When G.O.B. arrives, he sees Larry with the box and opens it. He assumes that George has gone along with his "tiny town" idea. Meanwhile, George has dropped his ice cream sandwich between the refrigerator and the counter. When he pulls out the fridge to retrieve it, he finds a way to escape the penthouse through an air duct. Buster, seeing the refrigerator out of place, pushes it back against the wall, and inadvertently traps George between the walls of the penthouse. Buster goes to his parents' bedroom, where he finds the radio George uses to communicate with Larry. On the TV screen, G.O.B. asks his father if he wants to build the "tiny town" with him. Buster, looking to spend some quality time with G.O.B, plays the part of George, and agrees.

Meanwhile, Tobias meets up with Frank. Frank needs Tobias to be a "mole" when the Japanese investors arrive to inspect the development property. Later, while Michael and Rita are on the Tantamount Studios tour, George Michael calls to say that he isn't sure if he should use the gift that has arrived for him. Michael assures him that it is okay, but he thinks George Michael is talking about a train set, not the jetpack that George had ordered for his next escape attempt.

Soon, the studio tour arrives at the "Tunnel of Love Indubitably". A voice tells the passengers to grab the hand of somebody they love, so Michael grabs Rita's hand and notices her bracelet is engraved "MR F". He asked her who "Mr. F" is, but Rita begins to change the subject. Michael turns around to see the man who had threatened him after his visit to Wee Britain and assumes he is "Mr. F". Rita tells him that the man is her uncle, and he wants Michael out of the picture. As Rita's Uncle Trevor tries to board the train, Michael throws him into a small pool. Michael, figuring Rita is a spy, tells her their relationship is over.

A few minutes later, Maeby receives a call that someone has already been injured in the "Tunnel of Love Indubitably", and her career as a studio executive almost comes to an end when Michael sees her. Fortunately for Maeby, Michael is too enraged after finding out Rita is a spy to care why Maeby is at the studio. George Michael, meanwhile, is trying to figure out how to use the jetpack by using the instructional DVD it came with. Although it is in Japanese, George Michael can gather that the jetpack is extremely dangerous.

In the model home's garage, G.O.B. and Larry are working on their "tiny town". Outside, Frank is wiring Tobias for the meeting with the Japanese investors. And Michael is on the phone with Bob Loblaw about Rita, whom he wants deported as soon as possible. Bob reminds Michael to make sure that his family do not deceive the Japanese investors, or else they can all end up in prison. But Michael does not get there in time. G.O.B. has already lined up the investors and opens the curtains to reveal his "tiny town". Surprisingly, it looks pretty good, and the investors are pleased. Michael wants G.O.B. to close the curtains and not accept any money from the investors. But before G.O.B. can, Tobias, dressed in a mole costume, walks over the hill and begins smashing the tiny houses. Within seconds, George Michael, strapped into the jet pack, swoops out of the sky and knocks Tobias over. The investors storm out, and are never heard from again. When the family walk out to see what is going on, there is high pitch feedback coming from Larry's microphone due to Tobias being wired. Tobias admits that his friend, Frank, wanted him to be a mole. Suddenly, it all makes sense to Michael: Tobias Fünke is Mr. F, not Rita. He has to go find her so he can apologize. G.O.B. tells his father through the surrogate that he had the time of his life building the town, but Buster, still playing the part of George, slips up and reveals himself.

Michael goes to Rita's apartment, where she is packing. The police have been called on Rita and her uncle, so they have to return to England. Michael, feeling guilty, asks Rita to marry him so she can stay and get her green card. She leaves a note for her uncle, grabs the gold star she had been promised, and rushes off with Michael. Meanwhile, the CIA agents are looking at the file they have on Rita. It is marked "MR F", the acronym for "mentally retarded female." We then see Rita unwrap the gold star and eat the chocolate center.

Retrieved from "https://arresteddevelopment.fandom.com/wiki/Mr._F?oldid=54767"
Community content is available under CC-BY-SA unless otherwise noted.