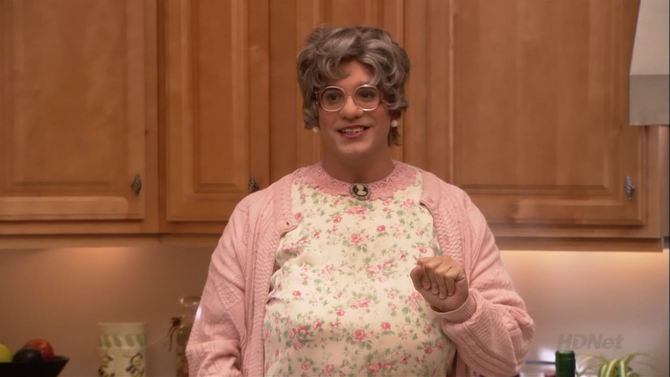 Mrs. Featherbottom is an alter-ego that Tobias Fünke uses in order to continue being around Maeby and the rest of the family after he moves out of the Model Home.

Mrs. Featherbottom is Tobias dressed as an unusual English housekeeper, a mix of Mrs. Doubtfire and Mary Poppins. She is apparently from Blackstool, which is also supposedly the origin of her Mini Cooper.

After being forced out of the model home by Lindsay, Tobias took up residence on the set of Wrench on the Tantamount Studios lot while working as a security guard. He found his way into the wardrobe department and decided that he could both prove his skills as an actor and love for the family. It was the exact plot of Mrs. Doubtfire. Maeby became crabby with both Tobias and Mrs. Featherbottom (whom she calls "Mr. Fingerbottom") for not being honest with her, but Tobias worked harder to iron her clothes and make her happy. ("The Immaculate Election")

Everyone in the family immediately knows that it is really Tobias, but he unwittingly kept up the pretence for several weeks because the entire family was pleased by the cleanliness of the model home. ("Sword of Destiny")

Wanting to get the family to discover him, he stops shaving and lets his wig and makeup become sloppy. Michael loses patience with Mrs. Featherbottom and gives up the game. Tobias, still acting, drives him to prevent George Michael from marrying Ann at the Church of the Good Shepherd in his/her Mini Cooper. ("Meat the Veals")

In Season Five, Maeby wears the costume to try to get into The Spotted Palm, she later rejects the act because she starts thinking that she's becoming her father.

group as three 56-year-old women looking for a place to rest their weary asses. The family enjoys living with Maeby and Stan Sitwell, but Maeby does not. After Stan leaves Maeby proposes a vote to decides who stays and who goes. This mirrors the dorm scene in "Flight of the Phoenix". Mrs. Featherbottom, Bev and Mrs. Gene Bettywhite all vote "Annette" and Maeby does too, cause she was starting to freak. The group is soon kicked out of the retirement house because Murphybrown made the mistake of not holding the phone as a woman.

Mrs. Featherbottom: ♫ When you put a squirt of frosting down your throat, before we take our medications... in the most delicious way! ♫

Narrator: Tobias had gotten access to the studio’s wardrobe and makeup departments. He was eager to both see his daughter and prove to his wife that he had what it took to be an actor. It was the exact plot of the film Mrs. Doubtfire.

Maeby: Right, missus. I should really get going.

Michael: Can’t you just tell him that you know he’s Mrs. Featherbottom?

Lindsay: Oh, no, no. She’s the only one who can hand wash my delicates.


From "Sword of Destiny"

Mrs. Featherbottom: Okay, who’d like a banger in the mouth? Oh, right. I forgot. Here in the States, you call it a sausage in the mouth.

Mrs. Featherbottom: I had this shipped over from Blackstool. It’s what I used to drive the Roger Moores about in. 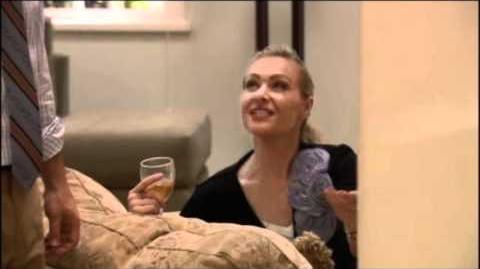 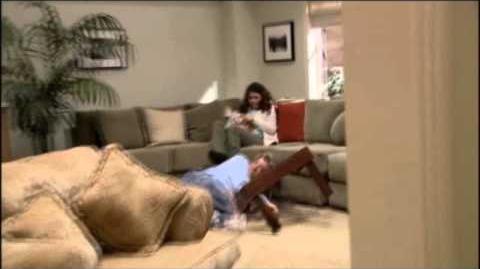