My Mother, the Car 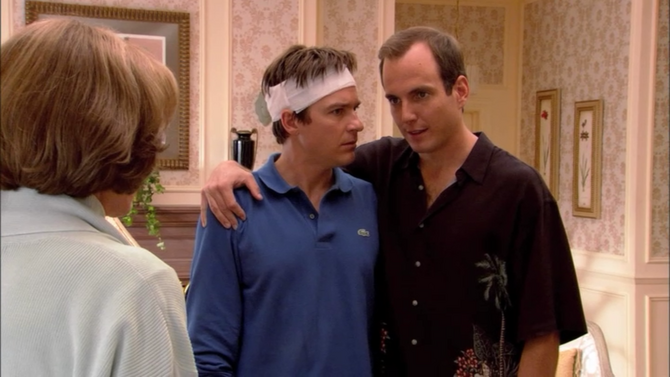 "My Mother, the Car" is the eighth episode of Arrested Development's first season.

Michael loses his short-term memory, which Lucille uses to her advantage. G.O.B. attempts to use the family yacht before Michael sells it. George Michael and Maeby attempt to see an R-rated movie about cousins having an affair. Buster and Lucille 2 take "the next step".

As Lucille weakly unloads groceries, Michael tells her to cut back on her spending, including her upcoming birthday party. At the model home Lindsay convinces Michael to throw their mother a surprise party. George Michael reveals that it was Lucille's idea. Michael drives his mother to the restaurant for the party but none of the other family members have shown up. He chews his siblings out and they agree to show up for the next one. Michael again drives Lucille to the restaurant but it is empty again. Michael lets Lucille drive the Mercedes home where she tries to run down a man on a segway but gets in a wreck.

Back at Balboa Towers Michael has been doped up by Dr. Miller and can't remember the accident. Whenever he starts to get a hint of what happened Lucille hits him on the back of the head. G.O.B. eventually figures out Lucille's plot and reveals the truth to Michael and Lindsay. They angrily tell their mother to be nicer and stop manipulating them, to which she manipulates them by throwing a pity party for herself.

Lindsay, on the request of Michael, visits George in prison. None of the other inmates pay attention to her so she returns in a nice dress and heels. Again, no heads are turned. She decides to buy a SLUT shirt to turn some heads but again nobody notices her. She complains about this to her father who reveals that he has been paying the other inmates off with gold Krugerrands to not stare at Lindsay. She is happy that her father is spending money on her.

Michael informs G.O.B. that he is planning on selling the family yacht that G.O.B. is currently living on. G.O.B. decides to flee down to South America on the yacht but decides to stay when he has the opportunity to expose Lucille as a liar.

George Michael and Maeby get kicked out of an R-rated movie so George Michael decides to ask G.O.B. to make them some fake IDs so they can see Les Cousins Dangereux. He visits the yacht to get fake French passports.

Buster has been dating Lucille Austero in secret. On a date on Lucille 2's balcony he sees his mother on her balcony and leaps through a plate glass window. Dr. Miller stitches him up.