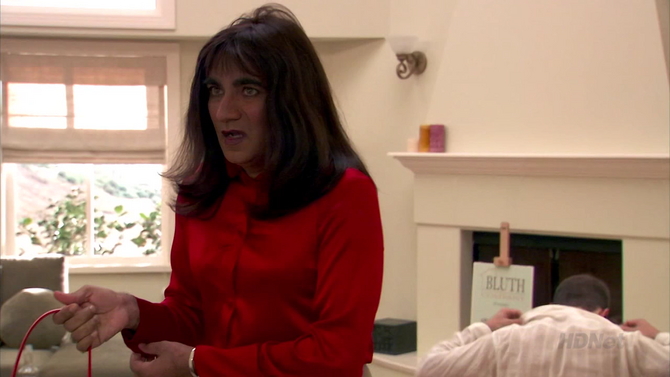 Nazhgalia Bahn-Ahden is a traditionally unattractive co-worker of Shannon's at National Garb that G.O.B. underhandedly sets Michael up with, but eventually sleeps with.

G.O.B. met Nazhgalia at the clothing store National Garb while flirting with Shannon. He called Michael to inform him that he had found a woman for him. In reality G.O.B. was still bitter at Michael for ruining his relationship with Marta and arranged the date to get back at him. Also, Shannon is a high school student and wanted Nazhgalia to attend the date as a chaperone.

At the Klimpy's Express, Michael was being polite to Nazhgalia—as any decent human being would—but G.O.B. mistook it for attraction and began flirting with Nazhgalia himself. He eventually took her back to the model home and slept with her. ("Shock and Aww")

Add a photo to this gallery
Retrieved from "https://arresteddevelopment.fandom.com/wiki/Nazhgalia?oldid=35511"
Community content is available under CC-BY-SA unless otherwise noted.