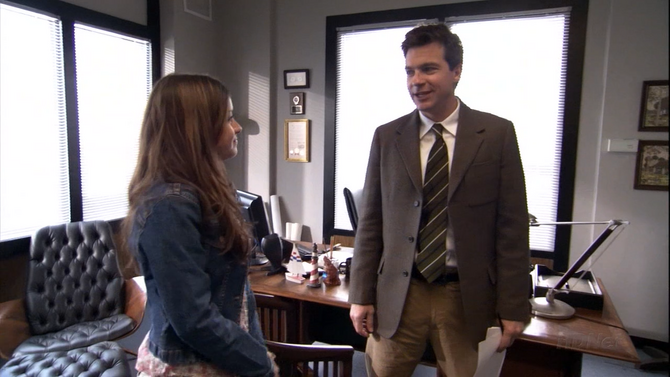 "Not Without My Daughter" is the twenty-first episode of Arrested Development's first season.

Michael takes Maeby to work with him on Bring Your Daughter To Work Day. After being slighted by Michael, Tobias, George Michael and G.O.B. all go to the mall to prove that they are just manly. Oscar takes Lucille and Buster to Annyong's soccer game.

At the police station

On the morning of the dreaded Bring Your Daughter To Work Day, Michael decides to give Maeby a good role model and bring her to the Bluth Company offices for a chance, dodging the bullet of bringing George Michael. At work, Maeby whines about being bored and Michael offers her a $50 bet that she can't go the entire day without lying. She accepts but makes him take the bet as well. Michael is then immediately questioned by Officer Taylor and Carter about Kitty's recent disappearance. Michael denies any knowledge, other than the fact that he threatened her. He then sees a tape of Kitty boarding the ill-fated Lucille yacht on a Girls with Low Self-Esteem tape.

Rather than admit to her family that she got a job as a shopgirl, Lindsay told her brothers that she stole her outfits. G.O.B. was jealous that she could pull off the feat so he decided to use George Michael as a distraction as he stole from the mall. Tobias, meanwhile, decided to get a job as a security officer to impress Maeby.

After buying $13 worth of mice, G.O.B. tossed them in the air as he began shoving shirts down George Michael's jacket. Lindsay, on the phone with Michael, shouted "I'm shoplifting!". Tobias tackled her with his cat-like agility. George Michael and G.O.B. were caught by the security guard's daughter. At the security office Lindsay revealed her job to the shock of her family. Tobias was later fired for trying to kill the mouse with his issued handgun.

On the soccer field

To spite Buster, Lucille allowed Annyong to join a soccer team. She asked Michael to attend a game as her date but he refused. She then turned to Oscar, who attempted to fondle and kiss her in the bleachers. Buster decided to tell him off and make him leave Lucille's life. When Buster was mocked by the soccer players for being fat, he barged onto the field and scored a goal, injuring many of the children. Oscar was the only one clapping, and Buster realized he may have frightened off the only person who supported him.

Add a photo to this gallery
Retrieved from "https://arresteddevelopment.fandom.com/wiki/Not_Without_My_Daughter?oldid=54814"
Community content is available under CC-BY-SA unless otherwise noted.