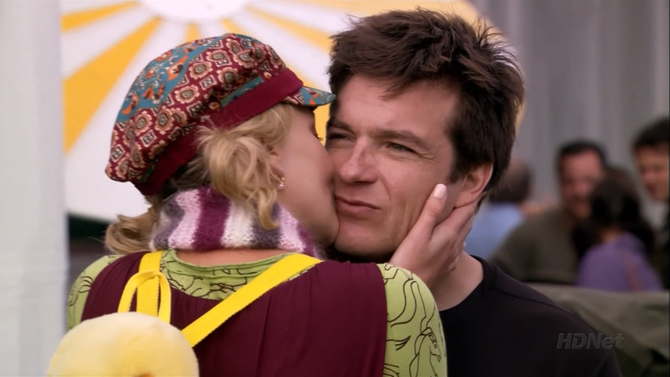 "Notapusy" is the fourth episode of Arrested Development's third season.

Michael enters a father-son triathlon with Steve Holt; Maeby dons a disguise to compete in the Miss Inner Beauty pageant while her parents coach other entrants; George speaks to at-risk youths, and Buster tries to recruit one to replace him in the Army.

Michael Bluth is on his way to the office when he sees something he wasn't used to seeing before lunch: his sister, Lindsay. She has recently taken a job with the Bluth's lawyer, Bob Loblaw, as his nanny, hoping he will give her a free divorce and then marry her. However, it seems that Bob's devotion to his daughter Hope is getting in the way of her plans. Michael suggests that in order to win over Bob, Lindsay should find something she's good at, and share it with Hope. At that moment, Michael notices that there is a message for him on the answering machine. It's from Rita, his new British girlfriend. She is waiting at the train station.

Michael quickly leaves for the train station to meet Rita, who is receiving her train ticket from the man she was "working with". Michael, out of breath, goes up to Rita to find out where she was going and for how long. Not wanting to seem too attached, he tells Rita that he had been out for his daily run. Rita, it seems, is also athletic having won "a silver medal in the Olympics". Michael, embarrassed to be out of breath in front of an Olympian, covers by telling Rita that she "takes his breath away". Rita, charmed by Michael's romantic statement, tells him that he is a "pussy". Michael can't believe it. What he doesn't know is that she meant it in the "British" sense of the word: sweet or gentle, like a pussycat.

With his masculinity having been questioned, or so he thinks, Michael returns to the model home to spend some time with his son, doing "guy stuff". George Michael, however, has other plans for the day. He had planned to on going fabric shopping with his girlfriend Ann. Ann is planning on entering the Miss Inner Beauty pageant at the upcoming state fair, which due to a lack of funds is now going to be the "Church and State" fair. Maeby, who had taken part in several "progressive" beauty pageants as a child, enters the kitchen and informs Michael and George Michael that there is no such thing as an "inner beauty" pageant. She believes that the girl with the best looks always wins.

Tobias then enters, inexplicably dropping the mirror he had been admiring his new hair plugs with. Lindsay, still looking for a way to win over Bob Loblaw, decides that coaching his daughter, Hope, in the pageant would be the best way to get Bob into bed. Tobias also sees it as a way to gain some respect, but from Lindsay. If he could get a certain young lady to enroll in the pageant, he thinks Lindsay would respect him more. Maeby assumes that she is the young lady Tobias had in mind, but it's actually Ann that he has hoped to coach.

G.O.B. arrives as Michael is cleaning up the mess from Tobias' mirror, and informs Michael that Steve Holt would be coming by the model home at any minute looking for him. Steve is G.O.B.'s son, but G.O.B. avoids him at all costs. Steve wants to enter the Father-Son Triathlon at the fair with G.O.B, but G.O.B is busy judging the pageant and doesn't want to waste time with his son when he could be picking up one of the contestants. After Steve told Michael that only a "pussy" would have a hard time competing in the triathlon, Michael agreed to compete with Steve and prove to Rita he was athletic. Unfortunately for Michael, G.O.B. is watching the conversation from outside the model home and plans revenge on him for "stealing his son".

Michael and Steve begin training for the triathlon. Maeby decides to sign up for the pageant, albeit, as her wheelchair-bound alter ego, Surely. Her plan was to prove that although they claimed to celebrate inner beauty, Surely's physical disabilities and general lack of conventional beauty would prevent the organizers of the pageant from allowing her to compete. She is wrong: the organizers are more than accommodating of Surely's disability.

Back at the penthouse, Lucille is meeting with Bob Loblaw to figure out a way to keep Buster out of the Army. Bob suggests that Buster take advantage of the Army's "one-in, one-out" program, in which Buster would be relieved of duty as soon as he could recruit someone to take his place. Michael, having forgotten about the meeting, arrives late and drenched in sweat from his training with Steve. Bob informed Michael that his father, George, had been getting bad press for his previous escape attempts, and that he should do some volunteer work to make himself look better. George, in the next room over, is being spoken for by his surrogate, Larry Mittleman, but is all for it. Bob suggests that George take part in a "Startled Straight" program designed to turn "at-risk male youths" away from criminal behavior. George decides to do it, and Buster realizes that "at-risk male youth" is an acronym for "ARMY";  he may have found a way for someone to take his place. Michael is unsure that his father is right for the "Startled Straight" program, but says he will look into it while he is preparing for his triathlon. George cautions Michael about participating in the triathlon, saying that "people lose control of every bodily function" and that Michael is not fit enough to participate in it. This scares Michael.

Meanwhile, Tobias, Ann, and George Michael are working on Ann's act for the talent portion of the pageant. Unfortunately, Tobias and George Michael had conflicting ideas as to what Ann needs to do to win. George Michael is afraid that Tobias' idea of having Ann sing a disco song featuring the word "hump" to camel was too racy, but Tobias feels Ann could not win without using sex appeal, or with George Michael as her coach. Ann then asks George Michael to give her some space.

Michael returns to the model home from another training session with Steve, to find George Michael looking upset. George Michael informs him that Ann didn't want him around during the pageant, so he suggests that the two could go to the fair and do some manly stuff together. But Michael has already signed up for the triathlon with Steve, whom he thought to be more manly than his son.

The next morning, Michael wakes up sore from his training, only to find his bicycle handlebars, covered in grease, lying next to him in bed. This seems to be how G.O.B. gets revenge on Michael for "stealing" his son. While Michael travels to the fair, Hope Loblaw takes the stage in the talent portion of the pageant to sing a song that Lindsay had penned for her. Ann is the next contestant, and she sings "We Three Kings" while towing a camel.

When Michael finds Steve, he is still sore, but Steve has a solution. He gives Michael "Oxy-Incontinent" pills, which Steve believes to be pills filled with oxygen, that prevented you from becoming incontinent. They were actually OxyContin pills, which have a similar effect to morphine. It doesn't seem to matter to Michael, he just wants to impress Rita. Maeby, meanwhile, is in the midst of a question and answer session with the pageant's panel of judges. She is trying her hardest to get kicked out of the pageant, but each inartful response only impresses the judges more.

George arrives at the fair to speak to "at-risk male youth" with Buster, hoping to encourage them to sign up for the Army afterwards. What they don't know is that the fair had two "Startled Straight" tents — one to divert teens from a life of crime and the other, sponsored by the church, to prevent them from becoming homosexuals. Not realizing he is in the church tent, George gives a speech about the horrors of prison to a group of young, gay males, who don't give him the reaction he had hoped for. At the pageant, Maeby is experiencing a similar problem.

Despite her best efforts, Maeby's alter-ego Surely has made it to the finals of the pageant, alongside Hope Loblaw and Ann. It looks like she is going to win, so Maeby decides to come clean. However, when she stands up from her wheelchair, the crowd mistakes it for a miracle, which increases her popularity and her standing with the judges even more.

Slightly dazed from the "Oxy-Incontinent", Michael arrived at the triathlon course with Steve, only to discover the event is actually intended for young children. Michael isn't happy, but feels sorry for Steve, so he decides to participate anyway. In the meantime, George Michael congratulates Ann on taking third place in the pageant. He tells her he was afraid that if she had come in first, she might have outgrown him. In actuality, Ann has outgrown him. She has met a man. George Michael is devastated. He feels he has lost his girl and his father because he isn’t masculine enough. He decides to sign up for the Army to prove just how much of a man he really is.

Michael and Steve are celebrating their "victory" in the triathlon, when Buster shows up to tell Michael that his son is signing up for Army. Michael, still tethered to Steve after the race, goes to stop his son from joing Army when he is noticed by Rita. He can't stop to talk and is too dizzy to walk, so Steve carries him to the tent where George Michael is about to enlist. At that moment, George, who has only managed to startle himself with his prison tales, exits the "Startled Straight" tent and decides to make a getaway. He is confronted by a difficult choice in getaway vehicles: the "popemobile" or a military grade Humvee. He chooses the one he thinks to be bulletproof; the "popemobile".

Michael convinces George Michael not to enlist, telling him he couldn't handle his son being in the army. Rita then appears, asking Michael if that was his son. Michael said "yes", and that George Michael was the most important thing in the world to him. This impresses Rita, who tells Michael that he is quite a man; a complete and utter "pussy".

Retrieved from "https://arresteddevelopment.fandom.com/wiki/Notapusy?oldid=54766"
Community content is available under CC-BY-SA unless otherwise noted.