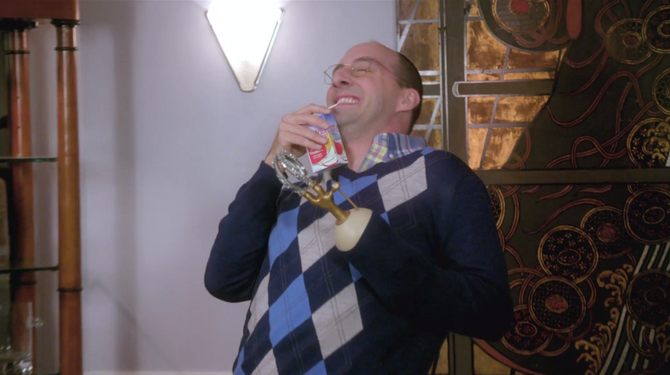 "Off the Hook" is the fourteenth episode of Arrested Development's fourth season.

Buster struggles to make it on his own and break away from his overbearing mother.

When Lucille was pursued by the SEC aboard the RMS Queen Mary Buster fell off the boat into the ocean. Lucille decided to use his rescue story as her innocent plea in court. However, at the harbormaster's she was locked up. Buster struggled to adapt to life at home alone so he proceeded to continue with her daily routine — picking clothes out for her and making her martinis. He stuffed pillows in her clothes to entertain himself. He was upset at how disproportionate they were so he destroyed the pillows and sewed a life-size Lucille doll with whom he began talking. Two days after she was sent away, Lucille returned with an ankle monitor.

After two months of living alone with Buster, Lucille had grown restless. On the night before her trial, Buster was lured into Lucille Austero's apartment and passed out of a juice overload. He ran to the trial but she was sent away to prison, mocking him. He then moved in with Lucille Austero because he needed a mother figure in his life, but she thought he needed a lover. He visited his mother at prison but she never agreed to see him. Lucille 2 eventually kicked him out so he sold the jewels he got on his hook to raise money to find a new place to live. At the pawn shop, he saw an Army sign which made him think he could impress her by joining Army.

Buster was immediately accepted back into Army and was unwittingly made a drone pilot, thinking he was merely playing a video game. After accidentally destroying a hospital in Spain, Buster panicked when he found out he was killing real people. He was rushed to the army hospital where Dr. Fishman gave him a bionic hand so that he wouldn't sue Army. Lucille arrived at the hospital, upset that she was lured there under false pretenses and told him he had to learn to be independent, so Buster decided to stay with Army. Buster began a rehabilitation program to learn how to control his bionic hand, but with disastrous results. The doctors soon discovered that he was failing the training on purpose, so they tricked him into delicately holding a kitten, proving that he could control the hand.

After failing the "cute test", he was released from the hospital and met Ophelia Love, who was there campaigning for her husband Herbert Love. She brought him back to meet Herbert who began using Buster in his campaign speeches as a symbol of wasteful government spending. At the Love home he was a dutiful son to Ophelia and protected her sons from bullies at school, which caught the attention of Perfecto Telles, vice president of the anti-bullying squad. At Herbert's speech at a hotel, Marky Bark's glitter bomb went off next to Buster while he was dancing onstage. Meanwhile, Buster grew closer to Ophelia, and they decided to take things to the next level and slept together.

Buster went to his mother's room at Austerity where he told her he didn't need her any more because he was in love. Outside he ran into Michael and signed his release for the movie project. He returned to the Love home and found out Ophelia just used Buster as a way to teach Herbert a lesson about cheating with a prostitute. She kicked him out of the house and on his way out he accidentally knocked himself unconscious. A few hours later, on the night of Cinco de Cuatro, Buster woke up and rushed to give the photos of Herbert and the prostitute to Lucille 2 to get revenge on Herbert. He was first sidetracked by Tobias, who asked that he play the role of Thing in Fantastic 4: An Action Musical, then by Perfecto Telles who asked he beat up Herbert Love on behalf of Maeby. He then gave Lucille 2 the photos and she revealed that she gave him the juice overload that made him miss his mother's trial. In a fit of rage, Buster drank some donkey punch from Gene Parmesan and knocked out Herbert Love with his giant hand.

Buster then meandered over to the stair car where he saw Lucille Austero lying in a pool of blood. In the darkness, several minutes later, her body had disappeared and Buster touched the blood to investigate what happened to her. The next day he visits George Michael and gets a thumbdrive copy of FakeBlock and tried to use it to erase the security camera footage of him by the stair car, but as FakeBlock is fake, it did not work.

In the chronological re-cut of season 4, footage from Off the Hook is used in 11 different episodes. The original cut of Season 4 is slightly longer than the re-cut version. Because of this, various lines of dialogue and sometimes even scenes are cut. These changes, as well as which scenes appear in which remixed episode, are listed below:

Michael: Congratulations, Mother, you've managed to combine people's fear of homosexuals and eels into one alibi.

Lucille 2: Are you ready to let go of your mother?

Narrator: Buster thought he was, although there was one ominous sign.

Buster: I am ready for that, Lucille.

Narrator: Did you hear it?

Lucille 2: Wait! Did you just drop the 2 after my name?

Buster: I hope not! That would be creepy.

Narrator: Before you accidentally skip back too far and wind up in the middle of the Maeby episode, trust me: no 2 was spoken.

Sergeant Briggs: I'm here to see you about your son.

Lucille: Oh, this is a ploy. He's trying to get me to see him. How do I know you're really in the Army? Who did Larry Kert replace in Company?

Sergeant Briggs: I don't know. I know who he thought he was replacing, and it was Dean Jones. But he didn't come close.

Lucille: I'm glad you have a new hand. But you need to find someone else to hold it.

Buster: Well, I have nothing to be ashamed about. I'm in love. And do you want to hear something so surprising? She started out as my mother figure. 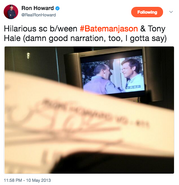 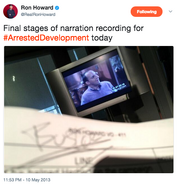 Add a photo to this gallery
Retrieved from "https://arresteddevelopment.fandom.com/wiki/Off_the_Hook?oldid=55008"
Community content is available under CC-BY-SA unless otherwise noted.