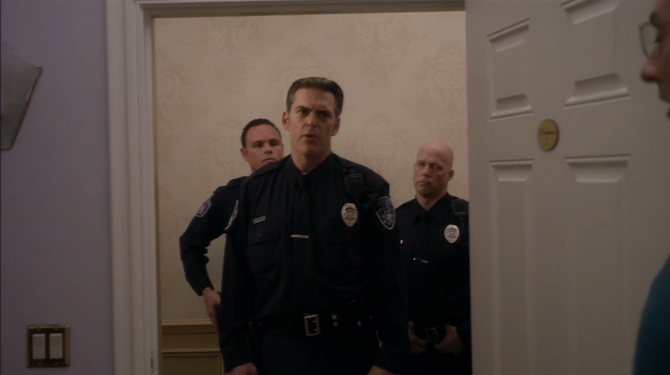 Officer Taylor: Well, we're here investigating the disappearance of Kitty Sanchez. Apparently, you’re the last person to see her. Alive. Or around town or whatever.
From "Not Without My Daughter"

Officer Taylor is an officer in the local police force. His partner is Officer David Carter. Although Michael is usually an honorable citizen, when he makes mistakes Officer Taylor is there to catch him in the act.

When George Bluth is on the lam, Officer Taylor and other officers often mistake Oscar Bluth to be George and tackle and beat him with their billy clubs. ("The One Where Michael Leaves")

While Michael tries to figure out who the father of Maggie's child is, Officers Taylor and Carter continually approach him to make sure he's not harassing Maggie. ("Out on a Limb") After Loretta gives birth, Officers Taylor and Carter reveal to Michael that they hired Maggie to be a surrogate mother for them and that they didn't want to know who the true father was (even though Carter is black and Taylor is white). They take their baby and leave happily. ("Hand to God")

Officer Taylor arrested Tobias during an episode of John Beard's To Catch a Local Predator. He also arrested Buster under suspicion of murdering Lucille Austero.

Officer Taylor also participates in Tony Wonder's Escape from the Closet Illusion during Gay Night at the Gothic Castle. ("A New Attitude")

Taylor is last seen in the season finale in a poster for Guys and Dolls. He is starring in the movie as "Rusty Charlie". ("The Fallout")

Retrieved from "https://arresteddevelopment.fandom.com/wiki/Officer_Taylor?oldid=53014"
Community content is available under CC-BY-SA unless otherwise noted.