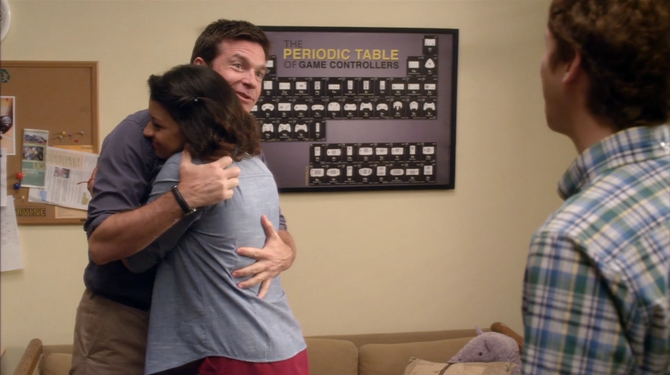 "One Degree of Separation" was the seventh episode of chronological re-cut of Arrested Development's fourth season. It premiered on Netflix on May 4, 2018.

As she negotiates her senior year of high school for the third time, Maeby encounters George Michael, who's having his own unusual school experience.

During her senior year, Maeby begins to date Perfecto Telles after they bond about being bad at math. Due to her grades, Maeby is sent to be tutored by college student. The student turns out to be George Michael who is surprised that Maeby hasn't graduated yet because they are the same age.

Years earlier, after the crash of the Queen Mary, Maeby tried to get her parents' attention by playing dead and George Michael decided that they shouldn't pursue a relationship, which she agreed with. Maeby decided that the best way to get her parents' attention is by flunking out of college which they didn't notice. Instead, she went to India as part of her movie producer job. Both Lindsay and Tobias were also in India, although they didn't know about each other or Maeby. Lindsay wanted to visit a Shaman so Maeby disguised herself as one in order to advise Lindsay to return home to the family.

Once they all returned home separately, the Bluth family met at Balboa Towers where George Michael was given a check to celebrate him going to college. Lindsay and Tobias still didn't realise that Maeby should be going to college too. Michael ordered George Michael to rip the check up and gave him a car, specifically the Stair car.

When George Michael arrived at college, the stair car got stuck under a low bridge and he attempted to distance himself from both the car and the Bluth name. George Michael started to make friends while Maeby began her senior year for a second time. Lindsay and Tobias still hadn't noticed and Tobias was still preoccupied by his acting career, even after the death of his agent. The family spent Thanksgiving together but, on the day of Lucille's trial, both Lindsay and Tobias ran off with other people, leaving Maeby by herself. Shortly after this, Maeby is fired from Imagine Entertainment by Kitty because she didn't have a high school diploma. Maeby decided to enrol onto a third senior year while George Michael was in his sophomore year of college.

Maeby moved into a Bluth model home while George Michael was studying abroad in Spain, where he had an affair with Rosalita. When he arrived back at college for his senior year at college, George Michael found he had a double sized dorm room because he was mistaken for twins. However, Michael arrived at the dorm and wanted to stay there after Pete the mailman died. Meanwhile, Maeby got bored of the lack of Internet at the model home and decided to start her fourth senior year at high school, which led to her meeting George Michael as a tutor.

Maeby still wants her parents' attention and plans to stay in high school until they notice her although George Michael thinks this bad idea. He then explains that there are three people living in the dorm room: himself, P-Hound, and Michael. Later, Michael joins them and encourages George Michael to tell Maeby about his privacy software, Fakeblock. Maeby feels discouraged by this and decides that she must graduate. At a bar, she notices Perfecto talking to police officers and sees him show a badge. She realises that Perfecto is actually an undercover cop.

On the next Arrested Development: Fateful Consequences, Maeby asks Barry about how long she can legally stay in high school because she believes Perfecto knows that she's too old. Barry advises her Maeby to get incriminating evidence on him. Maeby then takes a photo of Barry, who is lurking outside a high school, as something incriminating so he gives her advice for free. Meanwhile, Tobias continues to act at the Garden Grove Methadone Clinic.

Main Cast (in order to appearance)

Retrieved from "https://arresteddevelopment.fandom.com/wiki/One_Degree_of_Separation?oldid=54747"
Community content is available under CC-BY-SA unless otherwise noted.