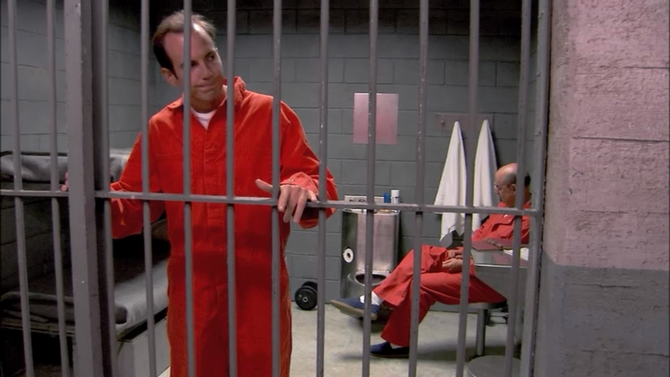 Orange County Prison, built in 1903 by the Bluth Company and located in Orange County, is the location of George Bluth's incarceration for the entirety of Season One after being arrested for fraud and light treason. It is also where he converted to Judaism.

The Bluth family often has trouble with the law and finds themselves incarcerated in a prison in Mexico, a prison in Iraq, under house arrest in Balboa Towers, or incarcerated at Orange County Correctional Facility L.I.T.E.


Apart from regular prison inmates George Bluth, White Power Bill, and Little Justice; G.O.B. was briefly incarcerated at the prison as part of this prison escape illusion. ("Key Decisions") Tobias also stayed at the prison for a short while to research his role of Frightened Inmate #2. ("Staff Infection") ("Missing Kitty") Barry Zuckerkorn was imprisoned after hitting Tobias with his car, and like George he considered it a vacation. ("The One Where Michael Leaves") Oscar Bluth was mistaken for George Bluth and was incarcerated for several months. ("Righteous Brothers") He attempted to spread the word that he was Oscar via the IMOSCAR.COM website. ("The Cabin Show")

The Bluth family later held a gala at the prison, hosted by the inmates, as part of their annual TBA fundraiser, this year to cure Tobias' Graft Versus Host condition. ("Prison Break-In")

Marky Bark was held for his "shrapnel grade" glitter bomb the same time Tobias was held for being a suspected sexual offender, after appearing on John Beard's To Entrap a Local Predator: Orange County Edition: Super Creep. ("Red Hairing") ("Smashed")

Buster is held for the murder of Lucille Austero. ("Everyone Gets Atrophy") ("Sinking Feelings") ("Emotional Baggage") ("Rom-Traum") ("Premature Independence") ("The Untethered Sole")

Stefan Gentles
Add a photo to this gallery

George Bluth, for fraud and stealing money from the Bluth Company

G.O.B., at will for Prison escape illusion ("Key Decisions")

Barry Zuckerkorn, for hitting Tobias with his car ("The One Where Michael Leaves")

Tobias Fünke, arrested for being a "sex offender" ("Smashed")

Retrieved from "https://arresteddevelopment.fandom.com/wiki/Orange_County_Prison?oldid=53738"
Community content is available under CC-BY-SA unless otherwise noted.