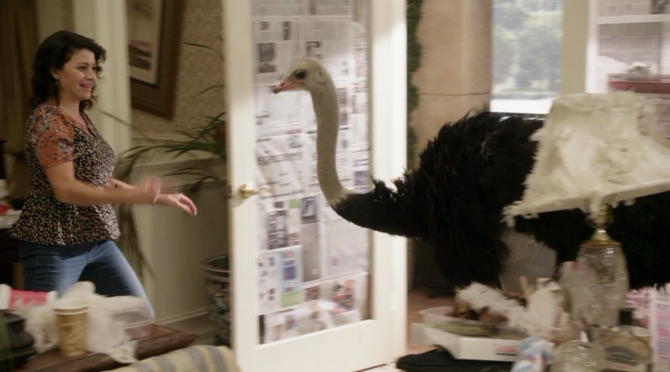 Ostriches are a recurring theme in Season Four. Most notably, Lindsay and Marky Bark move into Lucille's penthouse in Balboa Towers with Cindy the Ostrich. They are also mentioned in the Season One episode "Key Decisions".

Arrested Development showrunner Mitch Hurwitz has said that symbol of the ostrich works well for the Bluths as they share some of the same problems, they're unaware of how awkward they are and are essentially flightless (in the sense that flight equates to freedom.)

Jason Bateman: The ostrich was fake, so I got nowhere near him. The vulture was real, and he smelled surprisingly good, though we shot early in the day, so he probably had just showered. They’re not friendly looking creatures.     2013 Netflix Press Conference
Portia de Rossi: I worked with an ostrich. I did a lot of work with an ostrich, and it was terrifying. It’s big. They’re not very friendly, although they have nice eyelashes and big eyes.     2013 Netflix Press Conference

Retrieved from "https://arresteddevelopment.fandom.com/wiki/Ostrich?oldid=54548"
Community content is available under CC-BY-SA unless otherwise noted.