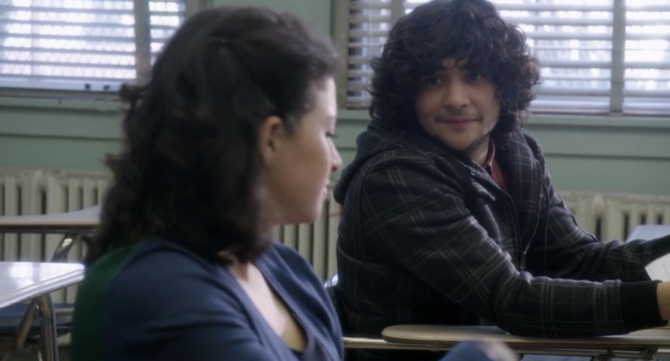 Perfecto Telles unknowingly has the same name as a man once arrested for engaging in a sex act in a public bathroom with actor George Maharis in 1974. Ironically, Maeby's Perfecto was also involved in an illegal sex act.

Perfecto was adopted by Lucille 2 during her Congressional campaign as an attempt to appeal to Hispanic voters. (4x2 — "Borderline Personalities") (4x8 — "Red Hairing")

He attended high school with Maeby (during her fifth senior year), and bonded with her during their time together in after-school algebra tutoring. He is also a big fan of teen stars, which is how they ran into each other at the Opie Awards. Unfortunately, they also once ran into each other at a bar, where Perfecto was flashing a badge to police officers, leading Maeby to think he is an undercover cop (which he later confirmed to Maeby at the Opies, telling her he was investigating a drug cartel). Concerned that Perfecto would discover that she was 23, Maeby decided to seduce him so that she could have something on him in case he tried to turn her in. Little did she know, Perfecto was not a cop, he was only trying to impress her, the "badge" he was flashing was for his school's anti-bullying program, and that he was actually 17. Maeby was then arrested for being a sexual predator, by the school's real undercover cop, Rocky Richter. (4x12 — "Señoritis")

At Cinco de Cuatro, Maeby, who had been pimping out her mom Lindsay for Congressman Herbert Love, got mad at him when he gave money to Lindsay directly. In retaliation, she told Perfecto that Love was "a bully," and asked him to "bad cop" him for her. (4x12 — "Señoritis") Perfecto then asked Buster, an honorary member of his anti-bullying program, to do something about Love. (4x14 — "Off the Hook") Buster later knocked out Love with his enormous prosthetic hand, but only because he already had a beef with Love -- not for anything having to do with Maeby or Perfecto. Even so, Perfecto bragged to Maeby that the problem had been "taken care" of.