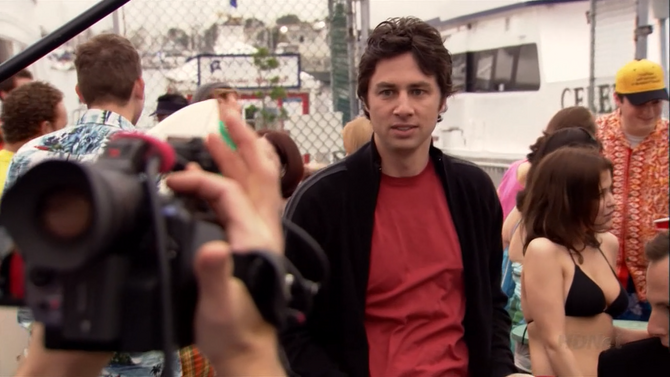 Phillip Litt is the creator of the Girls With Low Self-Esteem video series. He is also a Never Nude, just like Tobias Fünke.

During 2004's Spring Break, Phillip Litt recorded G.O.B.'s disappearing yacht illusion show but only included his flubs on his Girls with Low Self-Esteem DVD. During 2005's Spring Break, Lindsay protested his show but he turned the crowd against her. She vowed to get revenge on him for subjugating women by producing Men with Low Self-Esteem at the same Oceanside Wharf where Litt was filming. Tobias helped her, hoping to see some "bananas and nuts!" Lindsay pantsed Litt and it was revealed that he was a Never Nude. ("Spring Breakout")

Phillip Litt made a brief appearance at the Bluth family's "Save Our Bluths" fundraiser. During his brief appearance, he can be seen to be wearing jeans (presumably cutoffs) under his athletic pants. ("S.O.B.s")

Retrieved from "https://arresteddevelopment.fandom.com/wiki/Phillip_Litt?oldid=32490"
Community content is available under CC-BY-SA unless otherwise noted.