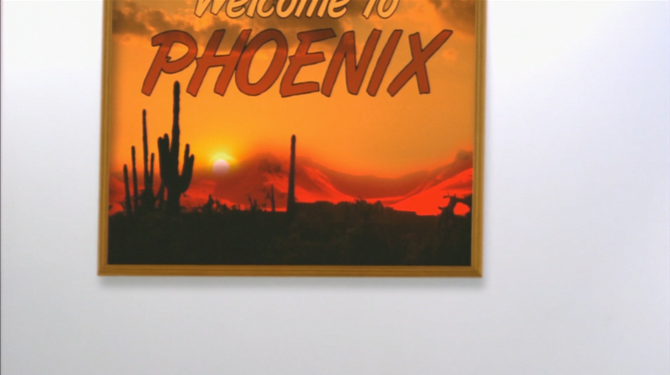 Phoenix
Appearances: "Flight of the Phoenix" — Mentions: "Pilot", "The One Where Michael Leaves", "Exit Strategy"

Michael claims on two occasions that he is moving to Phoenix, Arizona. He finally does in the Season Four premiere "Flight of the Phoenix".

After George is arrested and Lucille puts Buster in charge of the Bluth Company, Michael decides to move to Phoenix with George Michael for a job with Sitwell Enterprises. However, he realizes that his son wants to see more of his family and that the crazy Bluth family would fall apart without him, so he stays in Newport Beach. ("Pilot")

After George escapes from the hospital, Michael again decides to move to Phoenix but doesn't leave California because he wanted to be sure his family was aware he was leaving and would miss him. ("The One Where Michael Leaves")

Michael finally makes it to Phoenix in 2012 after the housing market collapses and his son kicks him out of his college dorm room. It is so swelteringly hot that he moved back just a few days later. ("Flight of the Phoenix")

Lucille: Well, if it isn’t the boy who cried “Phoenix.”

Richard Shaw: Okay, looks like you got us. What can the U.S. government do for you?

G.O.B.: We’re going to need some business class tickets home. And direct flights. None of this stopping in Phoenix bull bleep.

From "Exit Strategy"
Community content is available under CC-BY-SA unless otherwise noted.
Advertisement