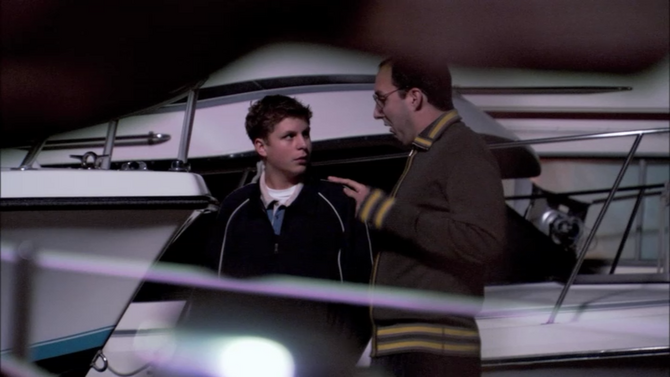 Buster realizes that medical marijuana will help cure Lucille 2's vertigo, and pays George Michael to get it for him from G.O.B.. Lindsay sends Maeby to spend a day with Lucille to punish her for bad grades. Michael thinks George Michael is on drugs and attempts to teach him a lesson.

Michael and Lindsay reminisce over the lessons their father and J. Walter Weatherman taught them as children when G.O.B. enters, asking for money to pay off his Hot Cops stripper agency. Michael refuses to help him out. When he sees his son punishing himself too harshly for an A- grade, he insists that George Michael go out and have fun.

George Michael instead heads to the banana stand where Buster, having once participated in a study involving marijuana and nausea, approaches him and asks him to buy marijuana for Lucille 2 who is suffering from a bad fit of vertigo. Michael arrives and orders his son out of the banana stand and to go have fun. George Michael, trying to be a good guy, asks G.O.B. to buy him the marijuana by leaving a note.

G.O.B. delivers the note and marijuana to Michael who blames his own aggressive parenting. He visits George in prison to ask about J. Walter Weatherman's contact info but George, now a pious man, refuses to help. Michael instead enlists the Hot Cops to fake a drug bust at the family yacht to teach George Michael a lesson. The strippers arrive and George Michael, wise to the gag because his choir teacher was one of the Hot Cops, tells his father that the pot was for Buster and Lucille 2. Michael sends his son and Buster home and a drug dealer approaches, insisting they pay for the drugs. G.O.B. and Michael try and convince him their ruse was just to teach his son a lesson when the police arrive and start a shoot-out with the drug dealers. Michael sees a man's arm fly off and realizes the whole thing is a ruse to teach Michael to not teach lessons.

After Michael warns Lindsay that Maeby's bad grades can set her on a bad path in life Lindsay attempts to punish Maeby when she gets a D- on a homework assignment. Her punishment is to spend a day with Lucille, who is doctoring receipts to hide expenses from the SEC. Maeby and Lucille initially bond but as the day wears on Maeby understands how lucky she is to have an easygoing mother like Lindsay. Lucille comments on Maeby's freckles and hints she may need to diet so Maeby leaves a note and escapes back to the model home, thanking her mother.

Add a photo to this gallery
Retrieved from "https://arresteddevelopment.fandom.com/wiki/Pier_Pressure?oldid=54803"
Community content is available under CC-BY-SA unless otherwise noted.