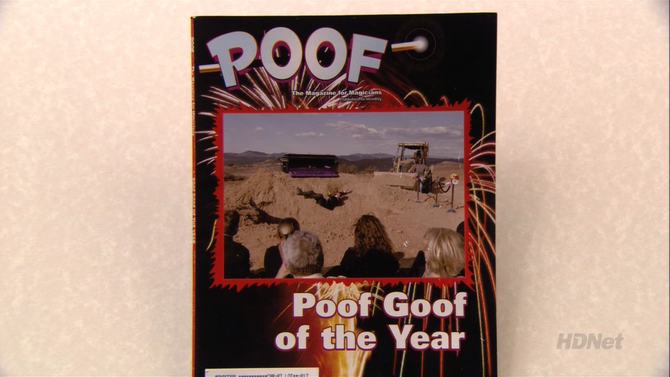 Poof is a magazine for magicians. The magazine recognizes impressive illusions such as Tony Wonder's soup-for-the-troops illusion. G.O.B. attempts to get on the cover of Poof but is only put in after messing up an illusion, the Magic Coffin Illusion, at George's 'funeral' as the "Poof Goof of the Year". ("Good Grief")

Lindsay is later seen reading the "Poof Goof of the Year" issue. ("Afternoon Delight") As is Tobias. ("The Immaculate Election")

A cover of Poof is seen with Tony Wonder on the cover, reading "Which is not why it says 'Poof' That is the name of this magazine. It is based on the sound that is made when something magical hapens!" (Season Four Remix — "Moving Pictures")

Add a photo to this gallery
Retrieved from "https://arresteddevelopment.fandom.com/wiki/Poof?oldid=48726"
Community content is available under CC-BY-SA unless otherwise noted.