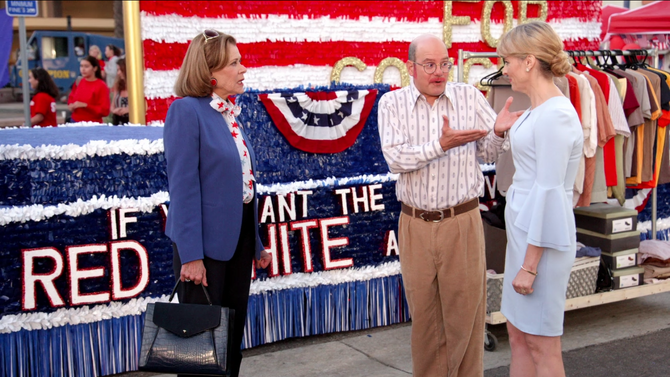 As the Second of July approaches Sally steps up her campaign against Lindsay while the Bluths again struggle to keep their stories straight.

G.O.B. goes over the parade float with Laguna Closet Conversions. G.O.B. calls Tony to see if he'll do the parade with him and Tony says yes. Lucille goes to visit Buster. She doesn't approve of him having started watching “Two And a Half Men." He says that maybe it's just him that she doesn't approve of. Lucille says she isn't happy with him because he told her that he didn't need her anymore. Buster is surprised that she's not upset that he's a murderer. Lucille says he isn't a murderer because Lucille 2 is fine. She knows who she's with. Buster wants to know why she doesn't tell anyone about that but Lucille says that he has to wait a while because it isn't the right time. Buster says that she better get him out soon or else he's going to start talking. George Michael goes to see Maeby who is packing up her things to leave the retirement home before she has to have sex with Stan. George Michael asks her why she has to leave if she was just going to pretend to be forgetful. She tells him that she is doing it because Stan called the cops. In reality, they weren't cops but members of the Keystone Cops who had come to invite Stan to be in the parade with them. George Michael tells her about how he followed Michael but didn't find him with Rebel Alley. On the way back to America, George Michael confessed to Michael about following him. Michael says that from now on they're gonna tell the truth. Michael congratulates Barry on making the lie convincing and Barry pulls out a picture of Lucille II and Oscar driving with the stair car. George Michael realizes that it's not a picture of Lucille II and Oscar but of Maeby and him wearing Brian Grazer and Ron Howard wigs. George Michael doesn't know if he should lie to Michael about it since it's the only proof they have that could exonerate Buster. Lucille continues to grow concerned over Lindsay and how she might not make it back for the parade. Oscar, disguised as George, shows up at the cottage and Lucille tells him that they're trying to get Lindsay elected but Buster wants the whole world to see him in an orange jumpsuit. Tobias calls and says that he's found Lindsay but she hasn't returned to Mary Bark's yet.

Maeby says goodbye to the retirement home but realizes that she loves this place so she's going to tell Stan it's over and kick him out. Tobias is offered 500 dollars to sell Murphy Brown Fünke to Marky Bark's mom. He says that he isn't for sale just as Lindsay shows up. However, it isn't Lindsay but DeBrie Bardeaux pretending to be Lindsay. Tobias convinces her to go to Newport and to pretend to be Lindsay there. Lucille is in front of their float waiting for Tobias when Sally Sitwell shows up with a new stair car. Buster arrives and is told that he's going to be on the Keystone Cop's float as a prisoner. Tobias makes it to the parade and Murphy Brown is pulled into the parade to be a clown. G.O.B. starts to second guess his float when Tony fails to show up. He asks Michael to be his partner instead but he passes. G.O.B. spots Buster and asks him but realizes that he's in prison and asks Buster why he's here. Buster tells him that Mom arranged it. Tobias presents DeBrie to Lucille who doesn't think DeBrie can pull off being Lindsay. Lucille finally relents but DeBrie starts to doubt herself. Michael approaches Lucille and accuses her of knowing where Lucille II was and letting Buster rot in prison. Lucille says that she did 3 years in prison because of Buster so he can do 3 weeks for her. Michael tells her that he's going to take the picture to Lottie Dottie but she says that her office is closed until the 5th. Michael spots Lottie Dottie in the parade and goes to ride in the car with her so that they can talk about Buster. He shows her the picture and she tells him that Buster is out of jail because he wanted to be in the parade. G.O.B. sits on his float but Tony doesn't show up. He's about to give up when Tony does arrive and the two perform the magic trick. G.O.B. and Tony talk about how they both did this gig so that they could see each other one last time and say goodbye. What they don't realize is their microphones are still on and the crowd can hear their entire conversation.

When Tony realizes that he doesn't have a trap door, G.O.B. steps out of the closet. Tony doesn't get the chance to because cement is poured into his closet, most likley killing him. G.O.B. opens his closet to find a cement block in his place. George tells Lucille about how the Mexican Romney's took the land that they owned. Lucille realizes that they have to lose the election. Lindsay's float passes by and Tobias and DeBrie are standing on it. But DeBrie is under a sheet and many think that she's disrespecting Muslims. George Michael arrives to talk to Michael about the picture but before he can tell him the truth Michael tells him that he used the picture to get Buster out of jail. George Michael still tells him the truth. That it was him and Maeby wearing Ron and Brian wigs. Michael asks what he was doing and George Michael's says that they were playing "Ron and Brian go to Mexico." George Michael tells Michael to go tell the DA that it's a fake but Michael says no and that they should make an exception to the always be straight with people rule. Oscar, dressed up as an inmate, goes and breaks Buster out of his parade float. They steal the stair car and escape together. DeBrie falls off her float trying to stop their float from running over children.