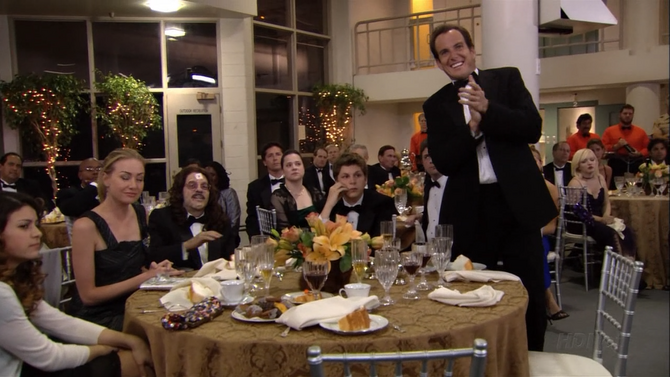 Michael is worried when he learns that Lucille is dating the warden behind his father's back; Buster's new turtle gets into "Uncle-Father" Oscar's stash; the family plans a benefit for Tobias' life-endangering hair transplant.

Michael Bluth paid an unexpected visit to his mother. Lucille immediately figured he wanted something, since he had been ignoring the family in favor of Rita lately. Michael reminded her that his relationship was over, and he thought it was for the best. But actually, he was so devastated by the breakup that he had broken out the old guitar.

Buster, meanwhile, was excited about the new pet turtle he had brought home in an incredibly misguided attempt to make his mother jealous. He had named the turtle Mother, and stored it in a box that Oscar had left behind. A box that Oscar used to store his medicinal marijuana. Michael reminded Lucille that he needed her because he was the co-chair of the Bluth Foundation Dinner. He wanted to avoid a previous debacle in which the family couldn’t agree on which disease to raise money for and sent out invitations that read, “Disease: TBA”. They ended up raising $25,000 to fight TBA. And then did it again the next year. When donors finally found out, they nearly rioted.

Lucille assured Michael that he had nothing to worry about because Warden Gentiles, the man who formerly ran George’s prison, was the new co-chair. And at that moment, the good warden was installing cameras in Lucille’s penthouse because of George Senior’s frequent escape attempts. And also so he could study George further because he was the main character in the warden’s screenplay, New Warden. Although George insisted that, thanks to his new hobby of making papier mache copies of his own head, he was now happy at home. Lucille raved that the warden was letting them hold the dinner in a new wing of the jail, and after dinner, everybody would get to spend the night in a cell.

So Michael went home to complain to Lindsay. This disappointed Maeby, as she had met with Warden Gentles to use his prison as a film location. Lindsey excitedly told Michael about this year’s disease, GVH, or Graft Versus Host, an insidious disease which Tobias was currently suffering from. His hair transplant was rejecting his body, meaning that Tobias had to remove his hair graft or die. Lindsay, of course, was making Tobias keep the hair until the benefit dinner. Tobias, growing sicker by the second, didn’t mind so much, since he got to star in the video G.O.B. was making for the dinner.

Michael began to worry that Warden Gentiles was using Lucille, but Lindsay figured he just liked her. George Michael came down and announced that he was going to skip the gala this year. What he didn’t say is that it was because he was having trouble looking directly at his dying uncle.

Buster was also feeling abandoned by Mother, his now dead turtle. But at that moment, his true father, Oscar, returned, looking for his weed. When he learned that Buster’s turtle ate it all, he tried to leave, not wanting to be seen by George Buster begged him to stay, telling him he could hide in one of G.O.B.'s tricks. And Maeby, bored by New Warden, asked George Michael to read it. And Michael raced to warn his mother of Warden Gentiles’ intentions. Michael found them having a romantic meal inside the prison. Lucille told Michael she was trying to seduce the warden, not the other way around.

Michael rushed home to tell G.O.B. and Lindsay what he had learned. Overhearing a conversation about something that wasn’t natural, George Michael perked up, asking if they were discussing a law that bans cousin love. He had read New Warden, and took it as a subtle signal from Maeby about their future, particularly after reading a part about what happens when two people share a bunk. Realizing that nobody else would help, Michael decided to approach Buster about interrupting Lucille’s plans.

But Buster didn’t care either. So Michael decided to tell George. He wasn’t exactly devastated. Mainly because he knew about it already. Michael, putting the dinner and the model heads together, figured out George was planning a new escape attempt. Which he was, with Lucille calling him from the prison to tell him the code for removing his ankle bracelet. Then she told George that if he was now free, so was she. And she was spending the night with the warden.

An ambulance arrived to take Tobias and Lindsay to the charity dinner. George Michael also said he was going so he could support Maeby. Feeling rejected by his family, Michael decided to stay home and read. But the family had no books. So Michael found New Warden and sat down with it. And that’s when Michael learned Warden Gentiles’ true intentions. He was merely using Lucille to get even with George. Also, he had given her chlamydia.

George needed to escape, but his papier mache heads would never fool the cameras. So he searched through G.O.B.’s magic stuff to find something he could use. And he did. Oscar, lying unconscious in one of G.O.B.’s cages, having been knocked out when Buster tried to stuff him in there to hide him. George then ordered G.O.B. to get his magic stuff out of the penthouse, which allowed George to hide in the magic box and then escape.

Michael found G.O.B. at the model home and implored him to help him break into the prison to save Lucille. And Buster found Oscar, who once again had been shaved to look like George. Oscar pleaded with Buster to set him free, which he did. But the police quickly arrested Oscar.

And the guys arrived at the prison to stage their break in. G.O.B. donned George Michael's jet pack, but forgot to strap it on. As a backup plan, he had drawn the prison blueprints on his stomach. Upside down. To read them, G.O.B. had to lie on the ground so Michael could straddle him in a very compromising position. A prison guard found them, but thought they were part of the gala and ordered them inside.

Inside, George Michael was inviting Maeby to pick a cell to share with him that evening. And in the warden’s office, guards led Oscar into Warden Gentiles’ office. In the dining hall, G.O.B.’s video began playing. An incredibly graphic video that featured Tobias spurting blood and picking off scabs. When the patrons learned that removing his hair plugs would cure Tobias, the crowd began to grow unruly. Very quickly, a riot broke out.

Michael caught up with his mother in a conjugal visit trailer and begged his mother not to go through with her plans. When she resisted at first, Michael told her about Gentiles’ screenplay. Which she already knew about. In fact, she gave him the chlamydia. George broke into the trailer and demanded that Lucille give their relationship one last shot. Then Warden Gentiles came in and asked if George was in here, who was being deloused at the moment? George admitted that it was Oscar, and told the warden that if he freed Oscar and gave George and Lucille one hour alone, they could call everything even. The warden agreed.