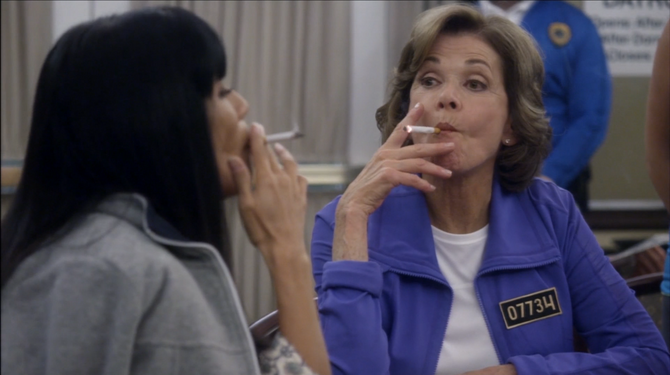 "Queen B." is the tenth episode of Arrested Development's fourth season.

Lucille finds that her children have already started divvying up her things and adjusts to her new home.

As the SEC chased Lucille down on the RMS Queen Mary, Lucille got the Hot Cops to shovel coal in the engine room while she steer the boat out to sea. Buster fell overboard but she kept going until Lucille Austero called her and mocked her about her arrest. Due to "sea rage" Lucille decided to turn the boat around to have the last laugh against Lucille 2, but the Queen Mary capsized. At the harbormaster's lodge, Lucille came up with her testimony — that she was turning around to rescue Buster.

Days later she returned home and lived with Buster for three months until her arraignment where nobody showed up but Barry and Lucille 2. Unable to use her sob story of wanting to rescue her son, she questioned Lucille 2 but the women's passive aggressive jabs eventually just turned into aggressive taunts. Lucille was sent to the Orange County Correctional Facility L.I.T.E. — a luxury white collar prison. George visits and offers her protection in prison via China Garden's aunt Olive Garden. Lucille joins their Triad gang and gets them to invest in the wall. Years pass and no progress is made on the wall so the Triads try to get Lucille killed with a noodle shank. She meets with George who promises he will convince Michael to sign away his rights to the Bluth Company so they can build a fake wall to trigger a government payment. He sends Lucille a video of him driving around a Hal & Burton's Frozen Goat Cream silo.

Upon seeing the inmates and guards of her prison have begun divvying up her belongings, Lucille calls Austerity and gets herself admitted to rehab. Tobias is her counselor and although she refuses to talk in session, she sits and stares at him every session. When Argyle Austero suggests to Tobias that Fantastic 4: An Action Musical needs a villain, Tobias writes the part during his session with Lucille who thinks he is insulting her. She nearly breaks down and cries and he interrupts her. She agrees to audition for the part because she wants to use the performance at Cinco de Cuatro to flee to the sea. Oscar calls Austerity looking for "Lucille 2", his current flame, but at Austerity Lucille Bluth is "Lucille 2" and he agrees to flee with her on the night of Cinco, but Lucille thinks he is George.

Michael visits and he signs away his rights to the Bluth Company and Lucille signs away her rights to the Untitled Michael B. Project. Michael tells her that he suspects G.O.B. is "the other man" Rebel is seeing and Lucille suggests he use Gene Parmesan to be sure. During Fantastic 4 rehearsal Lucille insults DeBrie and shatters her confidence. On the night of Cinco, Lucille runs into George who admits that he and Oscar have both been seeing her and that he has lost his sex drive. She demands a real divorce from him. Oscar then arrives and agrees to abscond with her but Lucille notices a Lucille Austero sticker on him and pushes him away too. Tobias arrives, needing someone to replace DeBrie as Sue Storm in the musical and tells her "you're not the villain". Lucille thinks he is saying this as her theralyst and agrees that she is just misunderstood and is mean as an act of self-defense.

Lucille walks away to make one last stop before Fantastic 4: An Action Musical performs. At the same time, a bloody stair car is shown and Lucille Austero has disappeared. At the same time, Marky Bark and Tobias explode in their boat, having placed the wrong luggage on the Herbert Love float.

In the chronological re-cut of season 4, footage from Queen B. is used in 11 different episodes. The original cut of Season 4 is slightly longer than the re-cut version. Because of this, various lines of dialogue and sometimes even scenes are cut. These changes, as well as which scenes appear in which remixed episode, are listed below:

Lucille: Thank you so much for coming to be my witness. You're such a large shareholder... Oh. I've made a pun!

Lucille 2: Oh, how could I not do it for my oldest friend? Oh! Now I've gone and done a double.

Lucille 2: Or your post-breakfast drink.

Lucille: We just need to get Michael to sign a release. He sold his shares, but he could still claim that he deserves a piece. Or worse, find out and blow the whistle. Where the hell did we go wrong with that kid?

George: Probably where we went wrong with the others, I don't know.

Tobias: This woman is a villain.

Lucille: You think I'm a villain too? My children are all waiting for me to die so they can divvy up my stuff, my Chinese gang mates were getting ready to noodle stab me, and even one of the guards called me "Gangie," and he was talking about the monster movie. He thinks that horrible monster looks like me. So fine, you want to call me a villain, I accept it! I'm your villain!

Tobias: Uh, actually I was writing down a casting breakdown for the role of Lucia for my Fantastic Four musical.

→ See more quotes from "Queen B." at Transcript of Queen B..