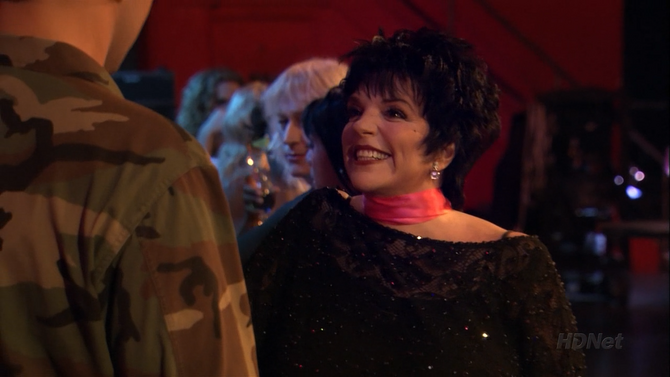 "Queen for a Day" is the eighth episode of Arrested Development's second season.

Michael sells a portion of his stock in the Bluth Company to buy a car, and Lucille 2 returns, only to discover that Buster is dating the company secretary Starla.

As George Michael is getting ready for school he comes across a box of love letters he'd written but never sent to Maeby. Michael comes in to offer George Michael a ride to school, causing George Michael to lay over the spread out love letters to hide them. George Michael tells Michael he's getting a ride in with the Veals and goes to hide the love letters in the attic. Maeby meanwhile is at the studio when Mort Meyers he asks if she'd read the pile of scripts he'd sent her and that he's expecting her notes on them. Maeby uses her "Marry me" deflection to get out of this. Back at the house Buster comes in because he's on furlough and everyone is out dancing with their girl and he's at home sitting around with Lucille. Michael mentions that Buster should go out and meet women who haven't given birth to him. Buster asks Michael to go out with him but he says his schedule is too busy, Tobias offers to be Buster's wingman even if it means him having to take a chubby. G.O.B. comes home because he was fired from Sitwell Enterprises because he kept pushing his Single City idea which became Swing City which became F**k City. G.O.B. wants his old job back at the Bluth company but says that he wants a company car since he had one at Sitwell. G.O.B. also mentions that George Sr. gave him a company car, Michael goes upstairs to the attic to confront his father about this. While upstairs George Sr. tells Michael how bored he is in the attic and asks for some reading material.

At the office G.O.B. tries to convince Michael to give him his old job back and says he will prove to Michael that he deserves it... and then promptly leaves. Barry is waiting for Michael in his office and tells Michael that the company stock is unfrozen. Michael asks if he could sell enough to buy a car, Barry says as long as everyone doesn't sell it would be fine because otherwise they could lose control of the company. Back at the house in the attic Maeby is reading her scripts and gets a paper cut from one of them and calls it quits. George Sr. is only too happy to have something to read and he begins to make notes on them. Michael goes to the car salesman to buy a modest economical car and ends up buying an expensive sports car. Tobias brings Buster to the Queen Mary where he meets Lucille 2, she just got back from a month long stay at the Plumb Clinic, a clinic specializing in the treatment of vertigo.

Michael is called to Lucille's apartment where he learns that Buster is back with Lucille 2. Thinking that something urgent had come up Michael had asked Starla to bring some documents over to the apartment. Michael introduces Starla and Buster who have the same interests as each other (they both love their mothers). Michael discovers that Lucille has had some work done in the bathroom, a larger tub has been installed. Lucille was supposed to let some workers into Lucille 2's apartment but instead had them do work on her bathroom and had them move the wall a couple inches into Lucille 2's apartment, she paid for it with her portion of the unfrozen stock. Michael returns home to make sure the others have not spent their unfrozen stock. He learns that G.O.B. is planning on buying a yacht, Lindsay promised her share to the country club, and Tobias had already bought the Queen Mary.

Michael is in the office asking Barry about the company stocks, he learns that they're 2000 shares short of being the majority stock holders the current majority stock holder is a company called Standpoor, which Michael assumes is Sitwell since it's the opposite. Lucille calls wondering if the Bluths had really lost control of the company, Michael mentions Standpoor and Lucille tells him that it's Lucille 2, Standpoor because she can't stand up without falling down. Lucille says that Lucille 2 is trying to get back at her for the wall moving. Michael and Lucille decide to give Lucille 2 Buster, taking him away from Starla. Meanwhile Tobias is in front of his newly purchased club, the Queen Mary, discussing a mistake the sign maker made, writing "Tobias is Queen Mary" instead of "Tobias's Queen Mary." When he is confronted by a group of roughnecks, really the Hot Cops hired by Lindsay to scare Tobias into selling the club, Tobias ends up recruiting the gang as dancers. At the office Buster breaks up with Starla, once Michael learns of this and the fact that Buster didn't sell his stock as to not hurt the family Michael tells Buster to stick with Starla and says he'll take care of Lucille 2. Michael brings Lucille 2 for a ride in his new car, which retriggers her vertigo. That night Tobias takes his gang on the street where they meet a real gang which they try to turn to good. They are subsequently beaten and one of the Hot Cops is shot.

Back at the Tobias is Queen Mary, Michael apologizes to Lucille 2 and confesses that the only reason Buster had asked her out that night was because they wanted to get control of the company again. Lucille 2 says that she loves the Bluths and that she's always had an order to buy all outstanding Bluth Company stock. Lucille 2 agrees to give Michael the stocks necessary for him to regain control of the company. The next day G.O.B. comes into Michael's office and says that he's fixed all the company's problems. We find out that G.O.B. [bleep]'ed Lucille 2 and that she's going to make him president of the company again. As president G.O.B. mentions that he's going to need the company car. In the "On the next. .." we see Tobias selling the Queen Mary to Barry.

Retrieved from "https://arresteddevelopment.fandom.com/wiki/Queen_for_a_Day?oldid=54783"
Community content is available under CC-BY-SA unless otherwise noted.