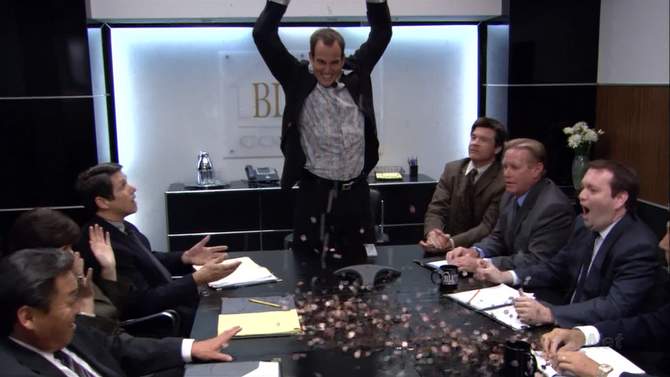 An illusion that G.O.B. commonly has prepared is his raining pennies illusion, where he showers his audience in pennies.

G.O.B. uses the raining pennies illusion to transform a $100 bill into 100 pennies, convincing the Bluth Company board to make him the president of the company. ("The One Where Michael Leaves") He uses the illusion again to get the board excited about his proposal to build the Second model home in two weeks. ("The One Where They Build a House")

G.O.B. attempts to wow his father with the raining pennies trick but he accidentally wore his "bird" clothes for his hidden dove illusion. He did successfully rain pennies upon on Free Chicken illusion audience. ("For British Eyes Only")

While trying to get the Bluth Company to agree to launder money from a Colombian cartel, G.O.B. accidentally shoots his pennies onto the conference room table. When it comes to the time in his speech to perform the illusion, he shoots one last penny into Tom's glasses. ("Making a Stand")

Board Member #3: Why should we believe in you?

G.O.B.: For the same reason you should believe a hundred dollar bill is no more than a hundred pennies.

Add a photo to this gallery
Retrieved from "https://arresteddevelopment.fandom.com/wiki/Raining_pennies_illusion?oldid=32506"
Community content is available under CC-BY-SA unless otherwise noted.