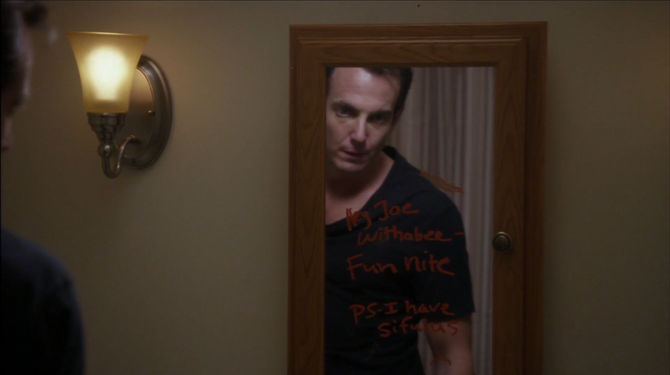 "Recurring Dreams" was the tenth episode of chronological re-cut of Arrested Development's fourth season. It premiered on Netflix on May 4, 2018.

George Michael attempts to follow his musical dreams. G.O.B. tries to keep his new friends. Tobias passes up a job, then lands in a rocky situation.

George Michael is in senior year of college and is trying to form a band. However, because George Michael's instrument is the woodblock, he cannot be heard although he still hopes to make a demo tape to send to Juilliard. It turns out that George Michael has a perfect internal clock, which helps his woodblock playing, because George Sr. placed a Babytock! in his crib as a baby.

Meanwhile, G.O.B. is still partying with Mark Cherry's entourage. He has started to take Forget-Me-Nows to help forget the shame of his nights out. However, he took one too late to erase a memory and is now in a "roofie circle", where he repeatedly takes Forget-Me-Nows because he has forgotten taking them but not forgotten the bad memory. Eventually, he must be taken to hospital with stage-four syphilis.

Back at the college, P-Hound and George Michael talk about making a woodblock app so it can be louder in the band. P-Hound buys the 3 available apps but they are unimpressed by the competition. Maeby, despite being the same age as George Michael, is in her senior year of high school for the fourth time. Her father Tobias hasn't noticed and is still pursuing an acting career with DeBrie Bardeaux. He also saved Lucille 2 from an ostrich at Balboa Towers by rushing her to the hospital. Out of gratitude, she offers him a job at her rehab center Austerity but he turns it down, wanting to focus on his acting.

G.O.B. returns to his partying lifestyle but Mark Cherry is beginning to get annoyed with him. Meanwhile, George Michael tries to buy a name for the woodblock and eventually buys the name "Fakeblock". To make sure he has enough money, George Michael gets a job as a tutor and decides to tutor Maeby in math. He pretends that he didn't know it was Maeby, as seen in "One Degree of Separation". George Michael wants to impress/seduce Maeby but her lack of math skills distracts him. Michael arrives at the dorm room and George Michael tells them about Fakeblock, although he pretends it is actually privacy software and not a woodblock app. This seeming success depresses Maeby and she goes to a bar to commiserate. While she's there, she offers the model home to the makers of To Entrap a Local Predator and also finds out that Perfecto is a cop. George Michael hopes ot make his software real because he is still embarrassed about his Star Wars Kid video, which a heavily pregnant Rosalita is also watching in Spain.

Mark Cherry writes the song "Getaway" because he wants G.O.B. to leave his entourage although G.O.B. doesn't notice. George Michael and P-Hound also want someone to leave, specifically Michael, and think about doing a roommate vote to kick him out. Michael also suggests such a vote to George Michael to get rid of P-Hound. However, Michael gets voted out and must leave. G.O.B. also finds the entourage trying to leave without him. He decides to drive them to a club to pick up some women, although his limo truck is also full of his sick bees which have been kicked out of Johnny Bark's Bee Company. One of the women he picks up is DeBrie, who has just fallen out with Tobias when she finds out he turned down the job at Austerity.

Tobias drives back to the model home, hoping to meet Maeby. Unfortunately, the house has been rented out to John Beard's To Entrap a Local Predator so Tobias is mistaken for predator due to the misleading way he talks.

On the next Arrested Development: Fateful Consequences... Mark Cherry asks G.O.B. to close the partition in the limo. This proves to be a problem as G.O.B. cannot warn DeBrie when she tries to open the trunk and accidentally releases the sick bees. Meanwhile, Tobias talks with John Beard whose team beats Tobias up, mistaking him for a predator.

Retrieved from "https://arresteddevelopment.fandom.com/wiki/Recurring_Dreams?oldid=54750"
Community content is available under CC-BY-SA unless otherwise noted.