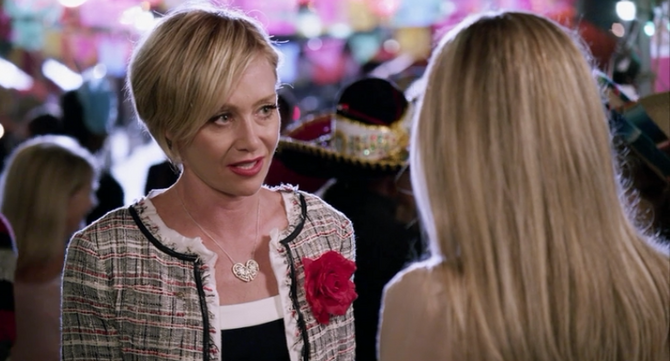 Lindsay continues to push away from being a Bluth by embracing a relationship and finding a new career.

After cutting her hair and changing her lifestyle with Marky Bark, Lindsay and Marky leave the ostrich farm and move into Balboa Towers with Cindy the Ostrich. While Lindsay sneaks away to spend time with Lucille Austero and enjoy fashion, Marky builds a glitter bomb to destroy Herbert Love's campaign. After finding a check titled Gangee 4: Facelift Lindsay approaches her mother on the prison tennis court who tells her that Lindsay is more like her than she thinks. Lindsay returns home and agrees to help Marky with the glitter bomb.

At Love's fundraiser dinner, Lindsay gives the $50,000 check to George (who, in turn, gives it to Love to support building the wall). She also runs into Maeby who finds respect for her mother's glitter bomb ploy. Lindsay loses track of time flirting with Herbert Love (not knowing it was him) and forgets to let Marky out of the podium (which was wedged shut by G.O.B.). The glitter bomb explodes and Marky is arrested. She get's Love's phone number, which Maeby witnesses, causing her to call her mother a whore.

After discovering Marky's charges have been upgraded to "non-Arab terrorism" in Orange County Prison, a dejected Lindsay visits Maeby at the model home and Maeby offers to call Love on her behalf. She meets him for dinner at The Ealing Club where she runs into Michael who (on behalf of George) asks her to get Love to oppose the wall project and in return Michael promises to have Stefan Gentles let Marky out of prison. In a hotel room, Herbert and Lindsay make love and Lindsay starts to think Herbert is the man her Indian shaman foresaw in her future.

They continue to sleep together for a few weeks in Love's limo until a date at the Balboa Club where she and Love run into Michael and Rebel. The very liberal Rebel and very conservative Love argue politics over dinner while Michael attempts to keep Herbert's approval. Herbert leaves to go home to his wife and Michael receives a call for his son, who wants to hang out but Michael blows him off. Outside the club, Lindsay reunites with the newly freed Marky who tells her of his next plan: to sink Love's boat with a bomb during the Cinco de Cuatro celebration.

The next day at Cinco de Cuatro Lindsay is broken off by Herbert Love and David. She is handed a wad of cash for services rendered and she is unable to throw it in his face. She then runs into her mother who insults her for being a hooker and also tells her that no matter how hard she resists, Lindsay is a Bluth at heart. Lindsay then asks Lucille Austero if she can be her campaign manager but Sally Sitwell has already taken the position. Sally shows Lindsay photos of her and Love and Lindsay realizes she needs to get ahead of the news story before she is forever known as a hooker. Love goes missing so David asks Lindsay to hold the audience and Lindsay prepares to admit she was sexually harassed by Love. Instead, the revelers upset her so she starts chanting to build the wall. When Love is found to be in a coma, David asks her to take his place on the ticket.

Herbert Love is discovered in a coma, David tells Lindsay he may not come out of the coma for ten years. David then asks Lindsay if she "would consider running in his place" in the election. Before David can complete the question, Lindsay says yes.

In the chronological re-cut of season 4, footage from Red Hairing is used in 9 different episodes. The original cut of Season 4 is slightly longer than the re-cut version. Because of this, various lines of dialogue and sometimes even scenes are cut. These changes, as well as which scenes appear in which remixed episode, are listed below:

Lucille: The apple does not far from the tree fall.

Lindsay: Oh God, he blued himself.

Marky Bark: They're upping my charges from prank bomb to non-Arab terrorism.

George: Fat Tracey or thin Tracey at the end?

Lindsay: How is she more qualified than me?

Lucille 2: She has integrity. And look at this hair. Look at this beautiful long hair. 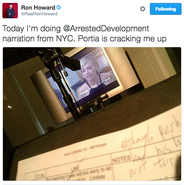 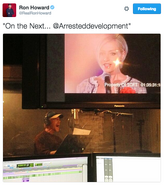