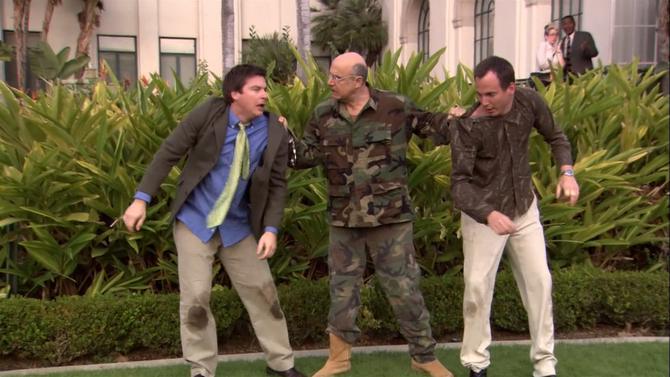 G.O.B. hides George Sr. while the model home's plumbing is checked; George Michael helps Ann protest Maeby's new movie; Tobias takes a liking to Kitty after Michael asks him to keep an eye on her.

Michael was working at home when he noticed something unusual. His pen rolled off the coffee table as if rolling downhill. A contractor examined the house and told Michael there was nothing underneath and since the drain pipes weren't hooked up, they just emptied under the house, which is why the living room was sinking. The city would likely have to "red tag" the house, and an inspector would come out to examine the house.

Michael told his father he'd have to leave the attic before the inspector arrived. Michael suggested his father hide at Lucille's penthouse, but George Sr. didn't want to go there because his freeloading brother Oscar was living there. Michael told his father that, with him being tried in absentia, Michael shouldn't even know where he is anyway. He doesn't have to go back to prison, but he can't stay there.

George Michael, meanwhile, was finding it difficult to ignore his re-emerging feelings for his cousin. Maeby asked if he wanted to attend a screening of the American remake of Les Cousins Dangereux, a film he and Maeby saw a preview for last year. Maeby was currently overseeing the remake for Tantamount Studio, where she had conned her way into a job. George Michael agreed to go, so Maeby gave him 50 passes and told him to invite everyone he knew.

Later at the office, Michael had another surprise. Tobias was resigning as his assistant in order to audition for the Blue Man Group in Las Vegas. He also told Michael that Kitty called, wanting to see him. G.O.B. came in and Michael told him that not only did he have to testify that he didn't know where George Sr. was, but George Sr. was refusing to leave the attic, so Michael was going to be caught for hiding him. But G.O.B. was upset that Michael hadn't thanked him for all the dirty work he'd done for the family recently, or commented on the "thank you" gift he made for Michael last week. The gift was a CD of G.O.B. singing with Franklin (which Michael misinterpreted as money to go in the mutual fund known as a Franklin CD). Michael assured G.O.B. that he loved the music.

Later, G.O.B. took Franklin to see George Sr. in an attempt to get him to leave the attic. G.O.B. had soaked the puppet's mouth with ether in order to knock out his father (just like he had knocked out his mother, at his father's direction, in a previous episode.) Downstairs, Tobias shared his good news about the audition with Lindsay. But she didn't want to move to Las Vegas and took it as a sign that they should split up. Or stay split up, whatever their status might be. Tobias then decided to pass on his audition to stay home and work on his relationship with Lindsay, in an effort to decide once and for all whether they should stay together or not.

Soon, G.O.B. was on his way to dump his father on the police station steps. And that's when he found the CD and thank you card he made for Michael, still unopened. Meanwhile, Michael was meeting with Kitty, and things weren't going as badly as he thought they might. She told him that she had been through rehab and was now at peace with the Bluths, as long as they didn't anger her again. Tobias came in and told Michael he wasn't actually leaving for Las Vegas. Michael realized he needed to occupy Kitty with a man, at least until his meeting about his father was over.

Later, Michael prepared to sign the affidavit stating that he had no idea where his father had been. As soon as he did, attorney Wayne Jarvis summoned the police in, telling Michael that there was photographic evidence discrediting the affidavit Michael just signed. The "evidence" was a photograph taken from a red light camera, but while it appeared to be Michael driving his father in the staircar, it was actually G.O.B. driving; when the photo was taken, G.O.B. had held up the unopened thank you card, which featured a picture of Michael on the front.

Now in police custody, Michael met with Wayne Jarvis; he told Michael he could turn in his father if he wanted to go free. G.O.B. arrived at the station and angrily asked Michael why he hadn't listened to the CD yet. Michael just wanted to know where George Sr. was so he could be released from custody.

And George Michael tried to break up with Ann. But then he found out Ann was excited about protesting the screening of Les Cousins Dangereux. He knew from past experience that Ann became inflamed at rallies and would probably kiss him in a fit of passion again, so he decided not to break up with her. Oscar, meanwhile, checked in on Buster, and an innocuous comment about Pop Secret popcorn made Buster finally realize that Oscar was his real father.

Lucille, meanwhile, was on the phone with Michael. Michael wanted Lucille to tell George Michael his father was out of town on business, and during the conversation, Lucille learned that Tobias was out on a date with Kitty. Knowing this news would devastate Lindsay, Lucille immediately told her. Michael also warned Lucille that he was going to tell the police that it was actually G.O.B. in the traffic photo. Buster barged in and accused Lucille of lying to him about the identity of his real father.

Back at the police station, officers played the CD that they had confiscated from G.O.B. The CD featured Franklin singing Bryan Adams's "Everything I Do (I Do For You)." Inspired, Michael realized that he couldn't actually turn in his brother. Singing the song at the same time, G.O.B. had the same realization and called Barry Zuckerkorn to have him tell Michael not to testify.

Maeby then came in and kissed George Michael in thanks for helping her movie become a success. The living room then suddenly collapsed a few feet, knocking Maeby on top of George Michael on the couch, where they kissed again, but this time more passionately. And that's when G.O.B. came home to retrieve George Sr. from where he stashed him, under the house that just collapsed.

But then G.O.B. remembered that this meant Michael would have to go to prison. Barry was leading Michael into court when G.O.B. sped up on his Segway and told his brother that their father had not been crushed to death (even though G.O.B. handcuffed him to pipes under the house, they weren't connected to anything, and George Sr. ran away.) Angry that he would end up going to jail for this, Michael started a fight with G.O.B. Tobias came up, happily announcing that he was going to Vegas with Kitty, but Lindsay wasn't about to lose her man without a fight. She rushed Kitty, who knocked her out with one punch.

Add a photo to this gallery
Retrieved from "https://arresteddevelopment.fandom.com/wiki/Righteous_Brothers?oldid=54793"
Community content is available under CC-BY-SA unless otherwise noted.