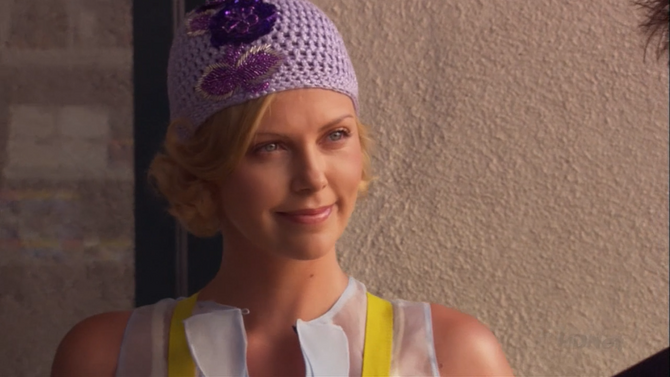 Rita Leeds is a mentaly challenged woman that Michael falls in love with in season three
Actor: Charlize Theron — First Appearance: "For British Eyes Only" — Last Appearance: "The Ocean Walker"

Rita is an English woman to whom Michael Bluth was attracted to and was briefly engaged. When Rita is first introduced, she is shown to have a secret. Arrested Development viewers are led to believe she may be a British spy, but in the end she is revealed to be an "MRF", or "Mentally R*tarded Female."

Rita was born in Great Britain. Her parents were cousins which is what led to her mental condition. Her parents were wealthy real estate investors and owned Wee Britain in Newport Beach. After her parents passed away, Rita inherited Wee Britain and moved into her apartment in California with her legal guardian Uncle Trevor. She attends Slowbrooke School and received plastic surgery with her inheritance. ("The Ocean Walker")

Her British accent usually distracts people from recognizing that she is mentally challenged. She convinces Maeby to have the characters in her movie walk across the ocean, Lindsay that she should wear her clothes inside out, and G.O.B. that she can hold her breath for 20 minutes. ("The Ocean Walker")

Michael met Rita in Wee Britain while investigating his father's "light treason" and was smitten by her sweetness and British charm. ("For British Eyes Only") Rita turned out to be mentaly challenged and Michael called off the wedding. ("The Ocean Walker")

Michael first saw Rita, the most beautiful woman in the world, at a bar in Wee Britain. He asked her if she could retrieve some British government records, as she had a British passport. The office was closed but Michael arranged a date with her. After being threatened by Rita's Uncle Trevor, Michael called off the date at Rita's preschool, thinking she was a teacher. Rita showed up at the courthouse and Michael asked her on another date, then swooped in to kiss her. ("For British Eyes Only")

Michael and Rita go on a date at Fat Ammy's and he lies to her, telling her that he doesn't have a family. Uncle Trevor urges Rita to get invited over to Michael's house (presumably so Rita's mental status would be discovered.) The Bluth family attempts to be nice and welcome Rita by picking her up from school in the family cabin. Buster sees her seal backpack and knocks her unconscious. G.O.B. feeds her a forget-me-now pill (or a roofie) to make her forget the abduction. They dump her on a bench where Michael later finds her. He stops by Balboa Towers to congratulate Buster and Rita finds her way up to the apartment and says "I don't like these people". Michael then finds out G.O.B. roofied Rita, and decides to be 100% honest with her and tell her all about his family's legal troubles. ("Forget-Me-Now")

Before going on a trip, Rita calls Michael a "pussy", which in British English means "sweetheart". Michael takes it to mean the American version and works out hard with Steve Holt to impress Rita (whom he believes is an Olympic Silver Medalist) at the Church and State Fair triathlon. After taking Oxycontin and running the childish Father-Son Triathlon, Rita appears. She again calls Michael a "pussy" and kisses him on the cheek. ("Notapusy")

Rita and Michael see Love, Indubitably and tour a Bluth Company construction site. Trevor tells Rita that she is there to "learn", not to fall in love. He reminds her of her objective by showing her a gold medallion. The Bluth family is made aware of a mole in their midst, and they assume it is Rita. The code name "Mr. F" is thrown out by Bob Loblaw. Michael assumes that since it is a "Mr." it cannot be Rita. On the Tunnel of Love, Indubitably ride at Tantamount Studios, Michael notices Rita's MRF bracelet and sees Trevor sneaking up behind them. He pushes Trevor into a hot tub in the ride and escapes. He calls Bob Loblaw to have Rita deported but when he realizes "Mr. F" is Mr. Fünke he goes to her house to pick her up. She steals the gold medallion, which turns out to be a piece of chocolate. FBI agents watching the Bluth family discuss that Rita is an MRF: Mentally Re----ed Female. ("Mr. F")

After telling his family that he is marrying Rita, they ask if he's gotten physical with her yet. They make him think she may just be marrying him for the greencard. Michael tries to plan a night of passion with her at a hotel, but she is locked into her apartment by Trevor's "invisible locks". He rescues her and takes her to the hotel, where George Michael shows his dad a video of Rita eating plastic fruit. Michael puts the pieces together and realizes she is mentally challenged. The next morning, Michael finds his family throwing him and Rita a surprise wedding. They found out from Uncle Trevor that Rita was filthy rich, so they wanted to rush the wedding before Michael found out. Michael let the cat out of the bag, to a dismayed Rita. They amicably broke up and Rita walked across the pool (as part of G.O.B.'s illusion) as she left Michael's life forever. ("The Ocean Walker")

While the narrator explains the Rita storyline, a photo montage of Rita running the "Two Legged Race" in the Special Olympics is shown. ("Prison Break-In")

Rita is later hired by Uniprod to run drama development, until they found out she was mentally challenged. ("Development Arrested")